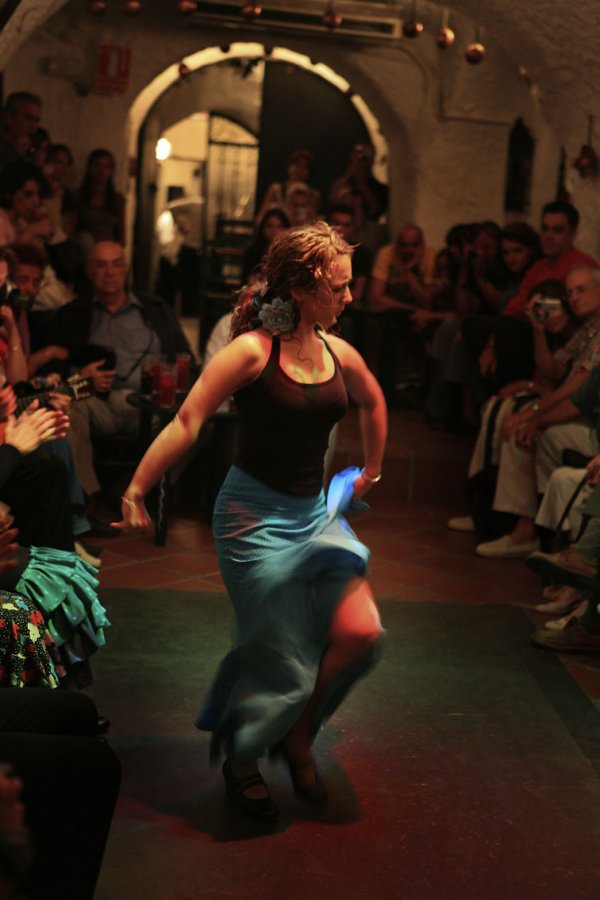 For those who do not know about flamenco, the palo is the most popular style of flamenco. All together there are about forty palos, eight of which are particular to Granada. It is important to clarify that many of the palos are part song and part dance.

Alboreá
The alboreá is a song quite common around all of Andalucía. It has a long tradition and is gypsy origin. The gypsies guard it jealously, since it is melody used in their wedding songs and the words refer to the virginity of the bride. As a dance, it is usually adapted to the tempo of the primitive soleá.
Granaína
The majority of experts attribute its creation to Antonio Chacón. It is sung free style and is accompanied by a guitar in B due to its high tessitura. It is from the group of the ‘levante’ songs and it takes its structure from the ‘fandango’.
Lorqueña
This song is like a serenade. The lover sings love songs to his love under her window. It is unaccompanied. Strictly speaking, it is not a palo in itself since as it is based broadly on the buleria. García Lorca created a series of songs with a flamenco influence performed for the first time by ‘La Argentinita’.
Media granaína
This was Antonio Chacón’s creation. It is exactly the same as the granaína, except that the changes in rhythm are more connected and more difficult to perform, above all at the climax, which is more elongated.
Roa
This is related to the zambra. Both styles are very representative of the Sacromonte district. They are songs of gypsy origin in which a group of men and women celebrate a ritual with religious resonance.
Saeta
This song is performed in whole Andalucía during the Easter processions in front of the religious images. The saeta is a vibrant expression that always relates to the Passion of Christ. The voice reaches an extraordinary depth to reflect the deep sorrow of the song and its words. The saeta became a popular around 1840, although references to it can be found as far back as the 18th century. It could have been Enrique el Mellizo who first sang this in front of a religious icon for processions.
Zambra
The zambra is best performed in the Sacramonte quarter, usually in caves. The zambra is a dance that brings three types of dances together in one: the alboreá, cachuca and the mosca, that symbolise different moments in a gypsy wedding. It is accompanied by monotone song and guitar playing, which shows that it is a style obviously rooted in primitive music. The performance shows a kind of ritual in which the dancers get more and more impassioned, as thought they are possessed whilst dancing.
Zorongo
It was very well know in the 18th and 19th centuries. The zorongo was a black American dance, which gypsies began to practice at the beginning of the 20th century. It is now a style in itself now and is performed by many dancers and guitar players. It is performed in modal tones and the first part is free style. Although it is typical for the whole region, it is considered as one the most genuine dances in the zambra.
﻿