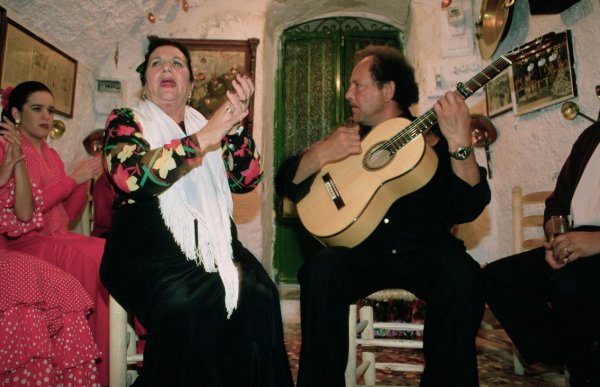 The origin of flamenco origin is unknown, because historically Andalucía has is a real fusion of cultures. Some experts think that flamenco comes from monochord Islamic chants. Others attribute it to Jewish psalm-like melodies inspired by Byzantine chants. There are other specialists who believe that flamenco is quite close to the old Hindu musical system, based on the fact that gypsies – nomadic people who came from India – scattered throughout Europe and introduced it to Spain at the beginning of the 15th century.

Whatever its origins, flamenco, also known as cante jondo or cante grande, is the most representative expression of Andalusian folklore. Its popularity started to grow in the 18th century when some of the different styles that now exist were born from the copla. Some years later, flamenco was already a widely spread and a famous art form. Cafés Cantantes, establishments where singing took place like a live concert, were created. This was the first step for flamenco becoming a musical genre.

Maestros such as the composer Manuel de Falla or the dramatist Federico García Lorca had an apocalyptic vision of flamenco because for them it had to be an art of the people, for the minorities from Andalucía, and not a commercial style. The fear of losing what they called ‘purity’ led them to create the first flamenco song competition, celebrated in Granada in 1922. The requirements to enter were that entrants were unknown singers; that they were local people from villages; and had not yet performed in the Cafés Cantantes.

This song competition was an important moment for flamenco and it took place in Granada, a province that had already played an important role in the history of the cante grande. In fact, the Sacromonte caves were where the zambra was actually created. Undoubtedly Granada is one of the main flamenco centres in Spain and, especially, the Sacromonte. This gypsy quarter is the centre of what experts call jondura and el duende, which dates back to the 16th century.

The first references we have of zambra are by María Gracia Cortés Campos in 1870. The zambra was often performed by dancers, musicians and people clapping all members of the same family.

But Granada developed other flamenco styles too such as the fandangos de Frasquito Yerbabuena, the soleá de Graná, and the granaína and media granaína, which were both created by Antonio Chacón. The Tango de Graná, characterized by its minor key and slow rhythm, is also worth mentioning.