Sixteen processions take place during Holy Week, from Palm Sunday to Easter Sunday. During this time the streets are always full with people, tradition and devotion.

One of the most interesting features is the celebration of ”El Paso”. On the morning of Good Friday dozens of people from Almuñecar turn into actors and perform a religious play, acting out the route taken by Christ through the Calle de la Amargura. 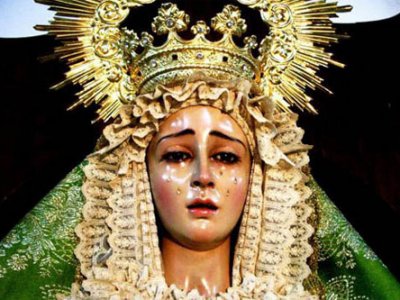 This Brotherhood was founded on the 9th February 1956 and went out in the Holy Week procession for the first time that same year. Since then the image of Christ on the “borriquita” (small donkey) is accompanied by women and children wearing Hebrew clothes, and with men who have grown beards. It starts from the Iglesia Parroquial de la Encarnación and passes by the official stage, which are the two highlights of the procession.

This Brotherhood was founded in 1993 and the first time it went out was during the Holy Week in 1997. The image of Our Lord, the Roman centurion, the executioner and the Virgin are all made by the sculptor from Seville, Juan Antonio Blanco Ramos. It is the only brotherhood in Almuñécar that carries the images with both sides directly on their shoulders. The entire procession is very interesting, especially the start, the entrance into the church, and the descent through the Cuesta del Carmen. 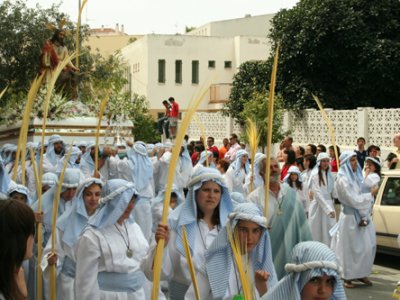 This procession was started in 1992 by some farmers from Almuñecar to celebrate Holy Monday, because no other processions took place on that day. They ordered Miguel Zúñiga Navarro from Granada, to make statues of the images of the Angel and the Christ, with Baroque figures made of red pine and decorated in rich golden colours. It represents the biblical passage of the suffering of Jesus in the garden of Gethsemane, on his knees and raising his hands to heaven; the Angel shows him the way to the Passion and his death. The moment of departure from the church and the procession past the official stage are the highlights of the route.

In 1990 the Brotherhood was founded and just one year later it took part in the Holy Week processions. The Christ, known as ‘El Moreno’ (dark-haired man), is the work of Miguel Zúñiga Navarro from Granada. During the procession the float is accompanied by women wearing embroidered shawls. The people sing saetas (traditional songs). They recite verses and prayers all along the route. The most interesting part of the procession are the departure from the church and as it passes by the official stage. 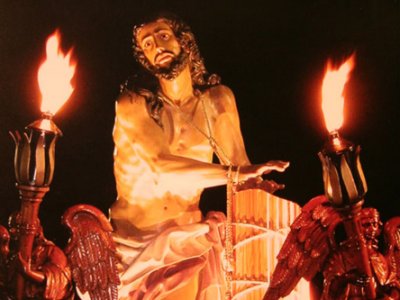 The Brotherhood was founded in 1942 and, since then the image of the Verónica with Mary Magdalena also goes out on Good Friday for the Holy Burial; this image has two roles in the Holy Week processions in Almuñécar. In 1994 the Brotherhood added a new image made by Antonio Díaz Fernández; in it the Christ wears a black tunic and carries the Cross on his shoulders on the way to Calgary. As the procession passes by the official stage, the two images meet (the Verónica and that of the Christ); it is the most interesting point of the procession.

The Brotherhood was founded in 1993. The float of the Descendimiento de Nuestro Señor Jesucristo de la Cruz (the Descent) depicts Joseph of Arimathea, Nicodemus, St John the Evangelist, the three Marys and Jesus. Other than St John the Evangelist and two of the Marys, the images were all made by the sculptor from Granada, Miguel Zúñiga Navarro. Highlights of the procession are when it enters into the San Miguel district by the El Majuelo park and when it passes the official stand.

The Brotherhood went out for the first time in 1957. Two drums accompany the statue of the dead Christ. All the streetlights are switched off in the town, and only the image is illuminated by candlelight. The worshippers proceed in total silence and devotion along the entire route, all wearing black tunics. The descent by the Puerta de Granada, the entry into the San Miguel district, the entrance into El Majuelo park, where flares are lit, and the procession along the Cuesta del Carmen, are particular highlights of the procession. 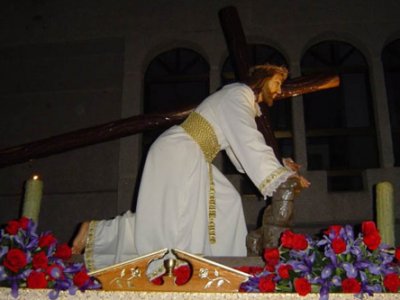 This is the procession of the oldest Brotherhood that takes part in the Holy Week celebrations in Almuñécar. It was founded in 1648. The original image of the Christ disappeared in the Spanish Civil War and was replaced with a copy made by Domingo Sánchez Mesa, a specialist in religious images.

The new one was carved in 1947, with natural hair. Simon of Cyrene and a Roman centurion are with him. The image is taken out again in the Good Friday procession “El Paso”. The best points to see this procession are when it starts and when it descends down the slope of the Puerta de Granada. There is also a special performance of the three times Christ fell; the first fall takes place in the Carrera de la Concepción, the second one by the official stage, when the “horquilleros” get down on their knees and carry the throne. On the last fall, in the Puerta de Granada, the image meets that of the Virgen de los Dolores.

María Santísima de los Dolores is the most ancient image in the Holy Week processions. The image is thought to come from a shipwreck that happened in the 16th century. Legend has it that a ship sailing to India lost its cargo during a shipwreck and it appeared on the beach of San Cristóbal. After several days the owners demanded the cargo, and everything other than two big boxes were handed back. Two images were found inside. On Good Friday, this image goes out in procession to celebrate “El Paso” and the Holy Burial as well.

Popularly known as the Cofradía de San Juan, it was founded in 1942. The Cristo de la Buena Muerte is a work by Antonio Barbero Gor (1984); the Virgen de la Amargura was made by the craftsman from Seville Juan Antonio Blanco Ramos. The image of St John the Evangelist was made by Domingo Sánchez Mesa (1947) from Granda. This image appears in the Holy Thursday procession, depicting him on his knees before the throne of Christ. In “El Paso” he appears standing. The best points of the procession are its departure, the meeting with the statue of the Virgen de la Esperanza in the Carrera de la Concepción, and as it passes by the official stand.

This brotherhood has taken part in the processions since 1958. The image of the Virgin is accompanied by hundreds of girls and women wearing black mantillas, whilst the young “horquilleros” wear navy-blue suits and white shirts and gloves. The statue is the Virgen de los Estudiantes (the Virgin of the Students), because a lot of her “horquilleros” are students from the different Spanish universities returning to their town to take part in the procession. After the station of Penitence, the brotherhood joins the Brotherhood of San Juan, and when the groups come together, the thrones are lowered as a sign of respect.

On Good Friday “El Paso” takes place. It is a religious play re-enacting the route Christ took to the cross. The images of Nuestro Padres Jesús Nazareno, Nuestra Señora de los Dolores, Mary Magdalene and St John the Evangelist take part in this re-enactment. The limbs of the statues can be moved so that their stances can be changed.

This performance dates back to the 16th century. The four images go out at 10am. The entire procession heads toward the Plaza del Ayuntamiento for the first stop, the “Paso de Simón”, where the Romans catch Simon of Cyrene. He is escorted by two Romans, who rhythmically bang their shields.

When they finish, the Romans give to him a handful of coins for his work. He throws them into the air and offers his help to the Jesus. This detail usually confuses the people, who believe this is Judas betraying Jesus.

The Brotherhood was founded in 1986. The sculptor Miguel Zúñiga Navarro carved the Christ recumbent and the Virgin. The residents of the San Sebastián district offer red carnations and white orchids to decorate the beautiful Baroque cedar throne. The departure from the church, the descent by the Puerta de Granada and the passing by the official stage are the highlights of the procession.

Founded in 1986 this is the official brotherhood of Holy Week in Almuñécar. For this reason its members as well as officials from the church, the military and the town authority accompany the procession. The image of the Christ recumbent is by Domingo Sánchez Mesa, made in the 1940s. The image is inside a glass an urn. The Santa Vera-Cruz, Santa María Magdalena and Nuestra Señora de los Dolores accompany the image of Christ with him, blessing the land, the sea and the town of Almuñécar.

This is the representation of the Way of the Cross, and all the people can take part, going out with the images with a candle and saying the Holy Rosary. The streetlights are all switched off. The Cristo de la Misericordia is covered by sheets, without lanterns or flowers, with just one light illuminating him. Nuestra Señora María Santísima de la Soledad is a sculpture by Miguel Zúñiga Navarro. And the statue of the Virgin is not adorned with any jewels. 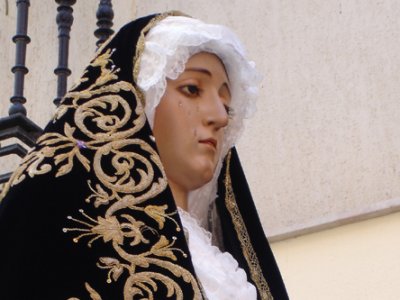 This precession began in 1986 and one of its special characteristics is everyone is welcome to take part. They may join the procession with a candle, with the women wearing a white mantilla. Any “horquillero” can also carry one of the images. The representatives of the different brotherhoods of Almuñecar accompany the Christ. Both images are made by the artist Miguel Zúñiga Navarro from Granada. The start of the procession from the church and as it passes by the official stage are particular highlights.