Pitres – a source of inspiration (GR-7)

Pitres – a source of inspiration (GR-7) 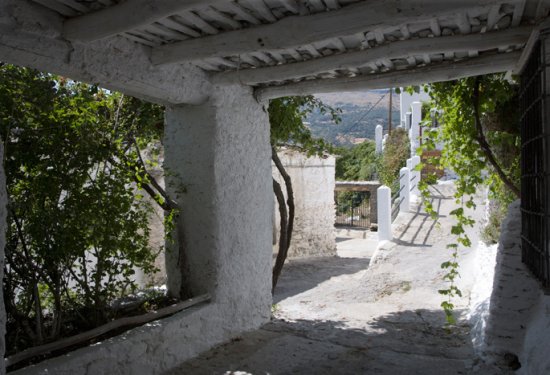 This route gives you the chance to discover some of the lovliest villages in Alta La Alpujarra, such as Capilerilla. You will aslo come across some unique landscapes full of interesting features. The entire area is alive with legends, such as the one explaining how the Barranco de la Sangre, (literally Blood Gorge), got its name. It is said that long ago it may have been the place where the Moors and the troops of Philip II faced each other in battle.

This route is of medium difficulty, and this walk is within the area of La Alpujarra Alta, between the Trevélez and Poqueira rivers. It passes through villages as fascinating and charming as Pitres, where the film ‘Al sur de Granada’ was made, and Capileira. This area has been part of La Taha, which preserves this Arab name since the arrival of the Moors to the region, and you will walk along tracks and trails surrounded by pine trees and impressive landscapes.

The villages of Pitres and Capilerilla are in the very heart of La Alpujarra Alta, between the Trevélez and Poqueira rivers. They are two of the villages that make up La Taha, the only municipality that has kept the name of the former Moorish administrative district. This route is ideal for people who flee from mass tourism and the cities, in search of peace and quiet. Its main strong point is precisely the landscape, overwhelming with colours, plant life, trees that are hundreds of years old, fertile fields, and a sense of peacefulness that pervades everything. Not for nothing has this area become a habitual place to live for artists, writers, or important musicians, who settle down here to find a source of inspiration in this peacefulness. In spite of this influx, the area is not suffering from overcrowding.

You can walk along trails and paths surrounded by pine trees. On the horizon you will see the Contraviesa and the Sierra de Lújar, snow-covered at this time of year. Now you can make out the Cerrajón de Murtas (from where you have a view of the entire La Alpujarra region) and the Sierra de Gádor, in Almería.  It is not difficult to imagine some of the more exciting chapters in the history of Pitres when walking along these paths, such as that of a tribe that descended from the Tartessians, whose existence was practically unknown and that incredibly managed to survive until the times of Philip II.

They did not have any form of currency, or any religious beliefs to speak of (they just made offerings of milk and fruit to a statue of Hercules now and again), and they lived a carefree and innocent life. They spoke a language that had Greek, Carthaginian or Basque connotations, and scarcely mixed with anyone else as they lived in caves. They were burnt at the stake, accused of being heretics and of not paying taxes by the Inquisition. 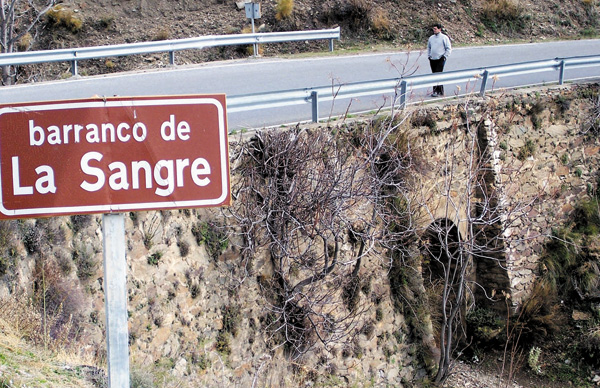 A section of this route through La Tahá de Pitres is part of the SGR-7, that if continued until Bubión is the first signposted route in the province, The trail follows the Barranco de la Sangre. The gorge was the historical backdrop for one of the fiercest battles during the revolt of the Moors. Legend has it that the entire area was covered with blood, but that God made the blood of the Christians rise up into the mountains so that it would not mix with the Moorish blood.

The traveller soon arrives at a path that goes down towards Capilerilla, one of the oldest villages of La Alpujarra, whose origins probably date from the Visigoths. It is the highest village of La Taha (1,400 metres). Eugenio Salguero is one of the few locals and is one of the most famous men in Andalucía. He lives his animals and organic fruit trees. This man gets up at 5 a.m. to milk his cow every day. He has also participated in television programmes, and even been an extra in the film Al sur de Granada, which was filmed here, recreating the spirit of Gerald Brenan’s world.

The typical architecture of Capilerilla has resisted the passing of time. The tinaos streets, chimneys and buildings of all types made of stone, chestnut wood and whitewash have been faithfully preserved by their inhabitants. It is worth the 10 minutes walk along a beautiful path that goes from Capilerilla to Pitres. You can see chestnut trees that are hundreds of years old, and all of nature at its purest and most unspoilt, as the only sound you hear is the nearby flowing water. Along here is an old washhouse in a very good state of repair, and natural springs. It is a real pleasure to drink the water that comes directly down from the nearby Sierra mountain range.

We finally reach our destination on this route: Pitres, the capital and geographical centre of the group of villages, with its typical streets and the slender tower of the symbolic church that had obviously started life as a mosque. Opposite is the Plaza Mayor, in considerably good condition. Although it has been modified, traces still remain that point to its former purpose as the square to arm the inhabitants to defend themselves against attackers, during the rebellion of the Moors in the 16th Century. This is a good place to work out the return route, as the village is well connected with public transport, but also to recover your strength in the restaurants and bars nearby. Here you can sample the excellent cuisine of La Alpujarra, or even look for accommodation to establish a base camp in Pitres, and find areas of La Alpujarra that are even more fascinating and not far from there.

Recommended season: Spring, Autumn and Winter. Only early in the morning during Summer season.