The spectacular beauty of the Barranco del Poqueira gorge has made it one of the best-known places in the La Alpujarra part of the Sierra Nevada. It best defines the harmonious relationship between the area's natural landscape and the local villages precariously clinging to the sides of the ravine yet perfectly integrated into their environment.

UNESCO declared this mountain mass a Biosphere Reserve because of its unique architecture, its terraced agriculture, its irrigation channels and the traditional activities of its people. Naturally, this Biosphere Reserve status also recognizes the incomparable natural environment that the area has to offer.

This suggested tour highlights the human activities pursued in this rough terrain and the wisdom with which its resources have been exploited, allowing the visitor to discover irrigation channels, farmhouses, threshing floors and terraces.

Before setting out on the tour it is advisable to check the weather forecast, especially in winter, because the itinerary takes us high into the mountains.

The itinerary starts in Capileira (altitude 1,450 metres). We walk to the highest part of the village and out along the Sierra road towards La Cebadilla. Leaving the last houses behind us we continue upwards along a bridle path still used today by the few locals who tend land and livestock on the Sierra. Ten minutes later we reach a rocky area where the path begins to zigzag, where you can enjoy stunning views of the Barranco del Poqueira gorge.

Further on we come to a lane, which we follow to the right, leaving it shortly afterwards to take a path that runs beneath the drinking water tanks. We then walk alongside the Acequia de Los Lugares below a replanted pine grove before moving uphill, crossing the irrigation channel and coming out on the track that takes us down towards La Cebadilla. 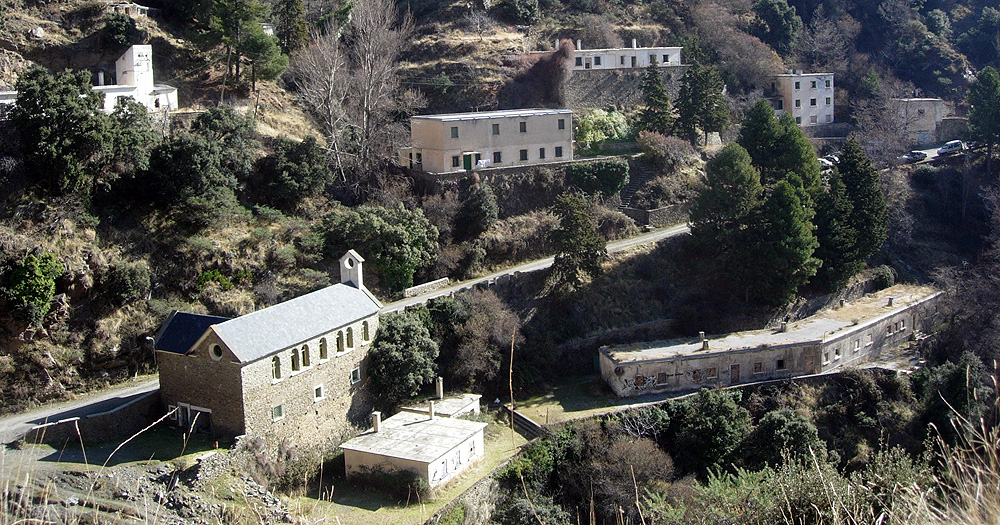 In the 1950s a hydroelectric power station was built in this craggy spot, taking advantage of the unevenness of the terrain. We finally reach the end of the track and cross the third bridge over the Poqueira. Next to the bridge there is a bridle path leading up between holm oaks and chestnut trees to a point with superb views of Mulhacén. It is a difficult climb up here, but well worth the effort. After just under half an hour of continuous zigzagging we reach a crossroads; the track to the left follows the Loma Púa ridge towards El Veleta, but we take the gentler right hand route.

A few minutes later we pass another path leading away to our left, next to a fenced farmhouse, and come out onto a flat area overlooking much of the journey that still lies before us. In the distance, directly below the Mulhacén and the Refugio del Poqueira shelter, we see the Cortijo de las Tomas. Ten minutes further on we come to a crossroads beside a farmhouse with walnut trees. We take the path leading down towards the river. On the other side of the valley we see the Acequia de Los Lugares irrigation channel, which we will later cross. 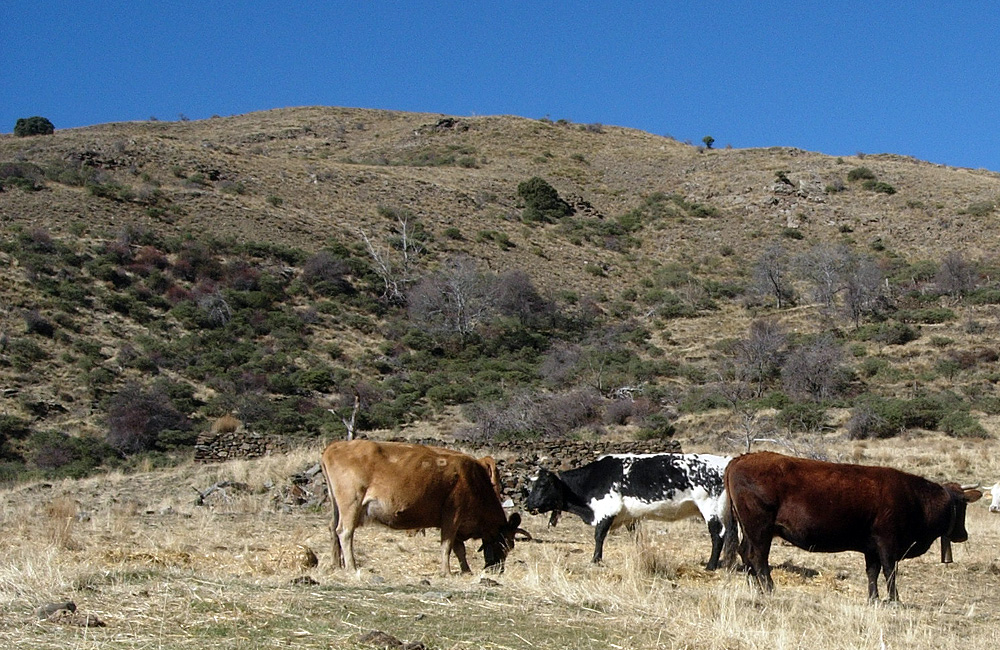 We follow the broad bed of the river, crossing the bridge over the Rio Naute (as it is called in this stretch) and arriving at the Cortijo de la Isla, a farmhouse which, judging from the threshing area further up, has not been flooded for many years despite standing in the centre of the watercourse. Upstream we pass beneath Los Tajos de Cañavete and cross the river by a bridge located in an area of large reeds where we also find the ruins of a farmhouse surrounded by cherry trees. The path climbs the slope out of the valley bottom and comes to another crossroads, where we take the track leading down to the river. We move through a muddy area half way up the slope and a few minutes later we come to the mouth of the River Veleta, which we cross by a bridge. Climbing further we come to the River Mulhacén, which we also cross before undertaking the strenuous northeasterly climb to the Acequía Baja. A little higher, we finally reach the Cortijo de las Tomas (2,100 m.). The name Cortijo de las Tomas stems from the presence nearby of the two tomas, or water outlets, supplying the Acequias Alta y Baja, the two irrigation channels of Moorish origin which carry water to La Tahá de Pitres.

To reach the Refugio Poqueira shelter from this strategically located farmhouse we have to continue climbing in the same direction to an altitude 400metres above where we are now. This will take approximately one hour (without snow). 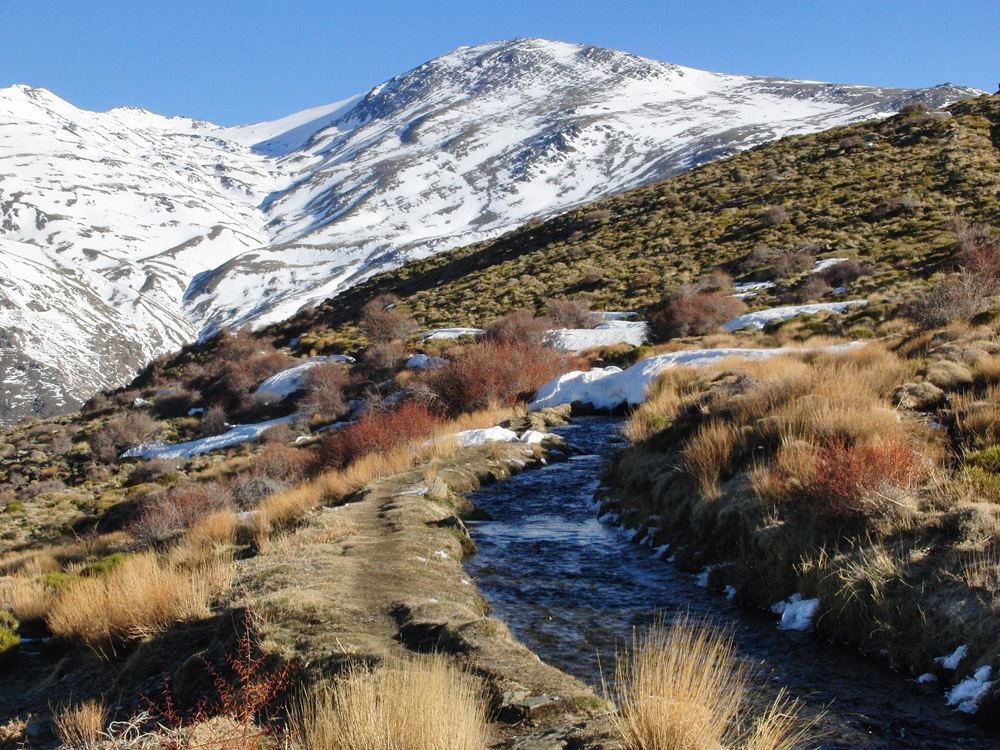 Our tour continues as we return towards Capileira southwards along a path, which is at first flat but then climbs toward the Acequia Alta. This walk of approximately one hour between the two ditches offers spectacular views of the surrounding area. Including the magnificent headwaters of the Poqueira, an impressive natural amphitheatre, which runs in a circle from the Pico Tajo de los Machos to Mulhacén at an altitude of over three thousand metres. The relief of the upper reaches of the Rivers Toril, Veleta, Río Seco and Mulhacén is clearly glacial in origin.

We now come to Los Corrales de Pitres, below the Acequia Alta. This is an area still used for livestock breeding, a traditional activity in Sierra Nevada where the abundant water, the gently sloping ridges and the climate have favoured the use of its meadows for grazing since the very earliest human settlements in the area. Further on the path begins to descend. We pass the Acequia Baja and enter a pine grove via a firebreak corridor. A few minute later we come to the La Cebadilla track, which we cross to continue our descent down another track in front of us. After a series of tight curves we come to the drinking water tanks, from where we rejoin the path leading back to Capileira.