Granada is an ancient city: the people of the Bronze Age, the Iberians, Romans, Visigoths, Arabs and Spaniards left their mark on the city. It has a long history, and the periods just before and after the conquest by the Catholic Kings, on 2nd January 1492, are particularly interesting. Before this date, Granada was a purely Muslim city, with many beautiful mosques, narrow streets and typical markets, and after it fell into Christian hands, it was turned into an example of modern city of the new Spain.

WAYPOINT 1 > PLAZA DEL CARMEN
The walk begins at Plaza del Carmen and passes through the historical centre of the city: the Plaza Bib-Rambla, the Cathedral, the Alcaicería and the Capilla Real. It continues through the Albaicín district and then returns to the Plaza Nueva.
WAYPOINT 2 > CORRAL DEL CARBÓN

The first stop is at the Corral del Carbón. In this place merchants, who travelled to here, put their goods and animals in the warehouses on the ground floor and stayed in the rooms above. The Corral del Carbón is the only warehouse from the Muslim period that survives in Spain. Inside, there was a place to do business, where merchants could rest and eat. When the city became Christian, it ceased to offer board and lodgings and was used solely as a warehouse. For this reason, it was given the name ‘carbón’ (meaning coal), as coal was stored in the basement of the building. There was a time when the courtyard of this building was used as a theatre.

Going down by the Calle Zacatín you will reach the Plaza Bib-Rambla. Even though the Christians liked the city of Granada as it was – its typically Islamic atmosphere with its narrow streets, little squares and small mosques – Bib-Rambla is a good example of the how the town underwent a process of Christianisation under the Catholic Kings. The size of the square was increased and it was transformed into the main square, similar to those they had in other Spanish cities. This square was where public celebrations would take place, such as processions, religious events and executions.

In front of the Cathedral is the Plaza de las Pasiegas. Queen Isabella the Catholic believed that the conquest of the Kingdom of Granada was so important for Christianity that even before undertaking the crusade, she asked the Pope for licenses to build churches in all the places that she would conquer. This is why she had the Cathedral built, which was dedicated to the Incarnation of the Holy Mary, like all of the churches that were built in conquered cities in the area at that time, due to the Queen’s great devotion. In the central rosette over the door, the mystery of the Incarnation is depicted. The sojourn of Charles V in Granada also marked the future history of the city. For example, the king built his palace in the Alhambra and he chose the cathedral as the place for his burial.

WAYPOINT 5 > IGLESIA DEL SAGRARIO
The Plaza de Alonso Cano, in front of the Iglesia del Sagrario, was built on the site of the main mosque of the city and was the Muslim urban centre. It was the heart of religious, social and judicial life.
WAYPOINT 6 > ALCAICERÍA

Just nearby was the Alcaicería, where commercial activities took place. The silk industry was the most important industry during the Nasrid period, so much so that the sultan controlled it and the neighbourhood of the Alcaicería was exclusively dedicated to its sale. The raw silk was imported here and the craftsmen bought it, paid their taxes and worked it in their shops, which would be located in other neighbourhoods. At that time they had up to 49 different types of silk including damasks, taffetas, satins and velvets. The Christians kept this industry going until the 18th century, as it was very lucrative.

The School for Quran Studies was located in the Madraza. In the Nasrid period, students were taught medicine and algebra here, as well as astronomy, poetry and music. For this reason, today is known as ‘Antigua Universidad’ (meaning ‘OldUniversity’). This building was also the first town hall in Spain. Of the entire building only the oratorio still remains, where traces of Nasrid art can still be seen.

Cross the Calle Elvira and go towards the Calderería Nueva, and you will reach the oldest neighbourhood of Granada, the Albaicín district. From here you can get great views of the Alhambra. The exemplary palace was an entire city in itself where the Nasrid sultans and all of his servants (about 2000 in total) lived. The Alhambra is in the shape of a boat and is located on the Sabika hill. It was built according to the traditional Nasrid design, but now Christian modifications, which began in 1495, can also be seen.

Granada became the political, religious and cultural centre of the Spanish kingdom of the 16th century. The building fever was enormous and the Real Chancillería, or Superior Court of Justice, with jurisdiction over the Southern half of the peninsula, is an example of that. The building was built under orders of Charles V. Another example of the same time is the church of Santa Ana. The Plaza Nueva continues being an important social and tourist centre of the city at the present time.

In the 19th century Granada saw a new transformation due to the economic growth, boosted by the sugar industry coming from beetroots. New communication channels were opened to connect the urban centre with the fertile plain and in this way the Gran Vía was built. The population doubled and, due to hygiene problems by the amount of people living there, the Rio Darro was covered. 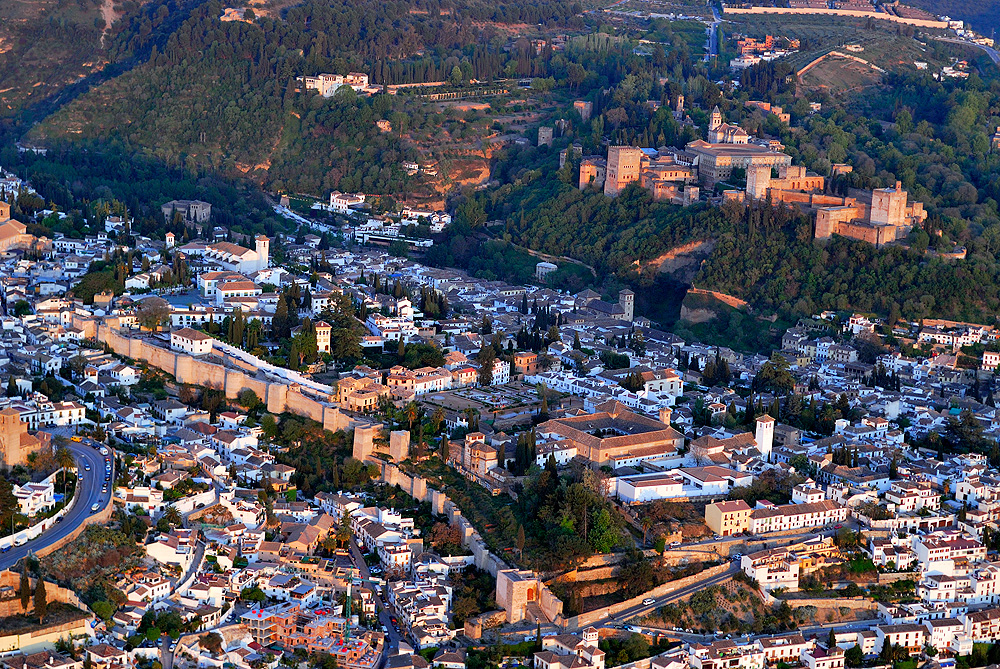 Iberians, Romans, Visigoths and Arabs settled on this hill, and the last ones built their first fortress here one thousand years ago. The characteristics of the Albaicín neighbourhood – that has conserved the labyrinth and intimate framework of its streets until today – made it worth of the Declaration of Cultural Heritage Site by the UNESCO in 1994 as extension of the Monumental Enclosure of the Alhambra and the Generalife. In this neighbourhood three types of typical houses survive: the palace area, the Moorish house and the Carmen. The first ones are also known as stately houses, which were built in their majority in the 16th century. These constructions are located in the lower part of the Albaicín, close to the centre, and have heavily decorated façades and two or three floors. They also have a courtyard with a fountain, surrounded by galleries with columns on four sides and wood ceilings. The Moorish houses are, in many aspects, a legacy of the Hispanic-Moorish houses. Located in the part of the neighbourhood that is furthest away from the centre, there are still 20-25 examples of these houses. They have very modest outer walls, two or three floors, wood ceilings and columns, but only at two sides, an inner courtyard and a small pond. The Carmen also has its origin in some Muslim houses before the conquest. The main characteristic is that they have a big garden. The water was a very important element in the Arab culture, due to the shortage that they have always had. The hydraulic system of the Albaicín was so perfect that it was in use for a thousand years until the 20th century.

The historical centre of Granada is full of alleys and corners rich in history and legends. Streets like the Calle del Carnero owe their name to strange events that happened there, which become legends of unrequited or impossible love stories between Muslims and Christians, of heroes, spells, miracles, or hidden treasures. The legend of the Calle del Carnero has it that in a house called Casa del Carnero lived a widow whose late husband had left a hidden treasure that nobody was able to find.. As the woman did not manage to find it even with the help of her cousin, a silversmith, she went to a wizard of the neighbourhood, who told them to go into the basement of the house during ten nights in a row. On the tenth night, they would see a gold-horned sheep that would guide them to the treasure. In the end, following the wizard’s advice, they found the treasure hidden in the coal storage room of the house. Over the last century these legends were exaggerated and repeated so much that they ended up distorted and, in many cases, loaded with topics. For instance, the the Spanish Inquisition made inquiries on the story of the Calle del Carnero and discovered that the widow and her cousin actually hid smuggled goods and engaged in illegal business. However, legends like this are extraordinary because they mix imagination and reality and make us wonder whether the story really happened.

Regions: Granada and its surroundings