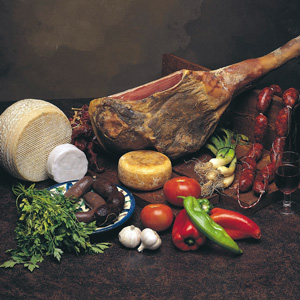 Local meats are often obtained from the traditional ‘matanza del cerdo’, which is like a festive celebration when family and friends gather to kill the animal. At the same time they taste the pork specialities including sausages, blood sausage, chorizo, lomo and Relleno. The latter is made with lean pork, salted bacon, dried shoulder, chicken, turkey, rabbit, saffron, pepper, cloves, cinnamon, molla bread, salt, eggs, lemon juice and garlic.

Trevélez ham is undoubtedly the finest pork product in the province of Granada, It has been awarded a Protected Geographical Indication.

Some of the finest pigs in the region are reared in the Valle de Zalabí, in ​​Guadix and El Marquesado. Their meat is used for typical recipes such as Tortas de pringue and Olla Matancera.

In Monachil and Huétor Vega there are many restaurants specialising in traditional cuisine. Their recipes use some of the finest local pork and are therefore hugely popular with locals from Granada on the weekends.

In the north of the province of Granada Quesos de Leyva are particularly good. They are made using traditional methods using milk from sheep following a traditional recipe from La Calahorra.

In the Poniente Granadino the Montefrieño cheese is the most famous. It is made using the milk of the local Murcia-Granada goats. Another local cheese made with raw milk also comes from here, as do other great varieties made with a mixture of cow and goat milk. These cheeses are excellent and have won a number of national awards. In the town of Jayena, located in the Parque Natural de la Sierra Tejeda, the Sierra de Almijara and the Sierra de la Alhama, the Cueva de la Magaha cheese is produced. It is handmade with raw goat milk, from goats that are fed outside; you can tastet he flavour of the mountains in the cheese.

Traditionally cheese has always been produced in La Alpujarra. Everyone who had a flock of sheep would make cheese for their family. Currently there are three dairy farms in the area; Quesería los Cortijuelos in Válor, Quesería de los Almendros in Cástaras and Quesería Venta El Chaleco in Murtas. These three comapnies continue to use traditional methods. Their cheeses are handmade, 100% natural, each with a unique flavour. They are made from goat and sheep milk.

Quesos RRR come from Vega of Granada and have won regional awards. These too are made from the raw milk from the local Murcia-Granada goat breed.