Zafarraya is an ideal place where to spend summer holidays for its cool climate, the proximity to the beach and its fresh and fertile orchards.

The Llanos can be accessed by mountain roads that lead as far as Loja, Salar or Alhama and take you through scenic spots like Las Parideras, El Carrascal, El Refugio and the Fuente del Espino. You can also reach the coast by paths through the pine forest of the Sierra Umbria. If you walk up along the road of Bernagal you can enjoy spectacular views over the Llanos with the Boquete in the background.

Man settled here many thousands of years ago. The remains of the Hombre del Zafarraya (believed to be 30,000 years old) are proof of this. This excavation provided invaluable information about the Neanderthal presence in the area. In the second millennium B.C., in the Argar period, towns were created in places that were easy to defend. An Argar site has been excavated to the south of the Llano. Phoenicians and Romans settled here later, as seen by the many objects excavated here and the remains of ancient roads.

It was with the arrival of the Muslims that the area was known for its cattle wealth. And its name comes from the Arabic ‘al-Fahs raiyya’ (field of shepherds), although some people think that comes from the word ‘Saiarraya’ (frontier). In the mid-8th century, the Pasillo de Zafarraya was used by the Umayyad prince Abd al-Rahman on his way to be proclaimed emir of al-Andalus. It was used by Muslims on numerous occasions too. Remains of numerous communication towers connecting the coast with the inland still stand today. This area was part of the Nasrid royal road, along which so many Arab travellers passed, including Ibn Battuta in 1349.

After the Reconquista it fell under the jurisdiction of Vélez Malaga and Alhama. In the 1884 earthquake 80% of its buildings were damaged and many had to be rebuilt. In 1913 Zafarraya became an independent town and shortly afterwards it was made its won municipality.

Due to its proximity to Malaga, the cuisine of Zafarraya is similar to that of Malaga and includes Sopa cachorreña, Ajo blanco and Morrete frio. The town is also known for its Chanquetes de la sierra, Sopa de maimones, Pucheros, Choto al ajillo, Chuletas de cordero, Lomo de orza and many different types of casseroles. 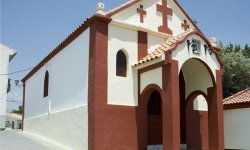 Inside this chapel there is a picture of Jesus painted on a window. This is the subject of a local legend and is widely venerated in the area.

This church was totally destroyed in the earthquake in 1884 and only a few parts of the original building still remain today. The current church was ordered to be built by General Narváez at the end of the 19th century. [...]

Zafarraya organizes its patron celebrations in honour of Nuestra Señora de Monsalud in September. The celebration is also known as the Big Fair. The religious and cultural events, as well as the night parties, stand out in the celebrations program.

The Route of the Almoravids and Almohads passes through three geographical areas. It starts in the so-called “pueblos blancos” or whitewashed villages of Cadiz, many of which have the words “of the border” in their names, an indication of the [...]

Zafarraya organizes its patron celebrations in honour of Nuestra Señora de Monsalud in September. The celebration is also known as the Big Fair. The religious and cultural events, as well as the night parties, stand out in the celebrations program.