‘The areas around Granada are unparalleled; they cover a huge area of 40 miles, cut through by the famous Río Chennil or Genil as well as many other rivers. The gardens, orchards, meadows, fields, castles and vineyards surround Granada on all sides.’ Víznar is one of these places mentioned by the writer Ibn Battuta.

Situated very near the capital at 1,074 metres above sea level, this is the highest town in the region within the Parque Natural de la Sierra de Huétor. The Plaza de la Constitución, or the Plaza Noguera, contains some of the finest buildings in the town. The town hall, the Palacio del Cuzco and the parish church are some of the best examples of domestic architecture in Víznar.

The nearby Centro de Visitantes (tourist office) and the Parque Cinegético in the Parque Natural de la Sierra Huétor are worth a visit. There is a stunning viewpoint from where you can get amazing views over the Sierra Nevada.

The town is of Arabic origin and it was founded because of the water pipe going from the Fuente de Aynadamar to Granada’s Albayzín district ran through here. The town’s mild weather and pure water sources make this a top choice for holiday homes. It was also chosen as the holiday retreat for the archbishops of Granada: for example, Archbishop Moscoso y Peralta commissioned the Palacio del Cuzco to be built for that very purpose.

Víznar was one of the last villages that fell into the hands of the Catholic Monarchs in 1491. It suffered a great deal during the rebellion of the Moors, and after their expulsion in the 16th century it had to be repopulated by Christian settlers.

In 1936 its history joined with that of Federico García Lorca, who was shot somewhere between Alfacar and Víznar. The poet and playwright spent his last hours locked up in La Colonia, a building next to the Acequia de Aynadamar whose traces are still visible in the middle of the road leading to the gorge where those sentenced to death were executed in the early part of the Civil War. Today there grows an olive tree to commemorate the place where it is believed that the poet is buried.

In this town, as in neighbouring Alfacar, one of the highlights is the local bread.  You should also try Volaillos, Barriguitas de vieja and Nochebuenos. Accompanied by homemade bread, the Olla de San Antón, the Menúo, and the Patas de borrego are excellent choices.

Gachas, all different kinds of pork, and Tortilla de collejas are delicious. For dessert we recommend filled pastries and almond pastries. 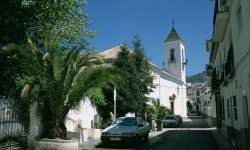 The church of Nuestra Señora del Pilar dates back to the 16th century, most probably built on the site of a former mosque. It is rectangular in shape and its single nave is decorated with a coffered ceiling. It used [...] 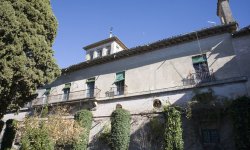 The Palacio del Cuzco was built as a summer residence in 1795 for Don Juan Manuel de Moscoso y Peralta, who was bishop of Cuzco at the time and soon to become the archbishop of Granada. 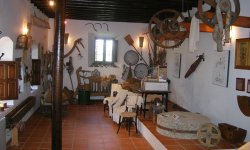 This ethnographic museum aims to preserve the history of the town of Víznar. By recreating the way of life of the past it teaches present generations about how people used to live. The museum is located in a flourmill, the [...]

The Centro de Visitantes Puerto Lobo stands inside the Sierra de Huétor Nature Park, near a recreational area of the same name and several signposted tourist paths. Inside there is an exhibition offering an insight into the natural heritage of [...]

The Acequia de Aynadamar runs to the north of town and at the end of it stands the original farmhouse. The original irrigation system from the Moorish period is still preserved, although it has undergone several restoration projects. The aqueduct [...]

The 3rd of February the patron celebrations of San Blas take place. The tradition is to distribute Rolls of San Blas, typical of the village. The next day they celebrate the Burial of the Vixen and the people go to [...] 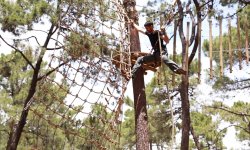 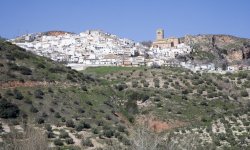 This route is altogether an adventure for the spirit: the two poles between which the fabulous cultural, religious, political and social legacy, which represents the stay of the Muslims in the peninsula, oscillates, with an almost moribund intensity.

The 3rd of February the patron celebrations of San Blas take place. The tradition is to distribute Rolls of San Blas, typical of the village. The next day they celebrate the Burial of the Vixen and the people go to [...]