Santa Fe is known as the ‘Hispanic cradle’. It was the town where the Reconquista culminated and where the Capitulations of Santa Fe were signed, a treaty securing the funding for the journey which led to the discovery of America by Christopher Columbus, the explorer from Genoa.

Santa Fe was built on the plains of Granada that are watered by the Río Genil. The rich and fertile agricultural lands stretch out to the southern hills. The entire old town centre, with its many interesting buildings and monuments, has been officially declared a site of historic and artistic interest. The city gates, the Iglesia de la Encarnación, the Ermita de los Gallegos, the Ermita del Señor de la Salud, and the Convento de los Agustinos (in Baroque style) are all worth a visit. The fertile surrounding lands include maize fields, poplar groves and orchards, occasionally interrupted by farmhouses and tobacco-drying factories.

The Festival de Teatro de Humor is held here and the Instituto de la Casa de América hosts a number of interesting art exhibitions. The delicious Piononos, some of the most typical sweets of Granada, are on their own a sufficient excuse to visit Santa Fe.

The towns of El Jau and Pedro Ruiz also belong to the municipality.

Santa Fe was built in 1491 by King Ferdinand on the site of a military camp used to besiege the city of Granada. The town was built in the shape of a cross, with grid layout and gates erected on each side. Its cross shape was a Christian symbol to illustrate their fight against the Muslims.

Santa Fe was where the court of the Catholic Monarchs was based until they left in May 1492. In the modest royal city the capitulations between King Boabdil and Queen Isabella and King Ferdinand were signed on 21st November 1491 confirming the surrender of the Nasrid Kingdom and detailing the treatment of the locals.

Here some of the decisive conversations with Columbus were held, and it was ‘in Sancta Fee on 17th April, in the year one thousand and four hundred ninety-two’ that the Capitulations of Santa Fe were signed. This document later led to the discovery of America and a new era.

When the kings left the town, Francisco de Bobadilla was appointed governor. The history of Santa Fe quietened down and its inhabitants focused on agriculture. In 1806 a violent earthquake caused serious damage to the town.

The local cuisine uses a lot of excellent vegetables and fruits. Thyme and aromatic herbs are frequently used too, for example in the a Piononos, biscuit-like cakes made with cream and topped with lightly caramelized sugar, created by Ceferino Isla in honour of Pope Pius IX. 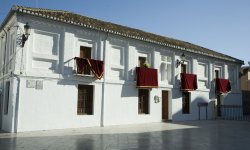 This was once the Royal Hospital, built by the architect Domingo Lois in 1786. It was one of eight hospitals founded by the Catholic Kings at time of the conquest of the Kingdom of Granada. Moved from its initial location, [...] 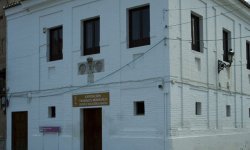 This house is located opposite the Casa del Párroco, in the Plaza de España, which was used as a communal barn, built by Charles III. Today, the local Tourist Office has its offices here. 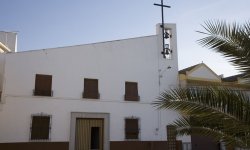 Originally this church was called Ermita de los Gallegos when it was built in 1498 in honour of all the Galician fighters who took part in the conquest of Granada. Since its renovation in the 18th century, it has been [...] 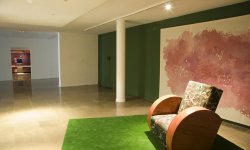 This institute was founded in 1992 with the aim of deepening the knowledge and understanding of American art and culture in the region of Andalucía. The headquarters of the Instituto de América is the Centro Damián Bayón. It is made [...] 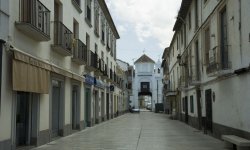 The Santa Fe town centre is itself worth visiting and it dates back to 1491. Santa Fe was built from scratch under the orders of the Catholic Kings, and was entrusted with the cities of Seville, Jerez, Córdoba and Andújar, whose [...] 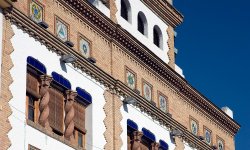 The town hall lies on the eastern side of the town’s Plaza de España. It was built of brick in neo-Mudejar style in 1923, and is decorated with the emblems of Latin American countries. 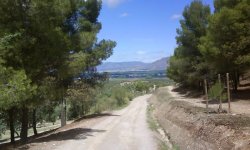 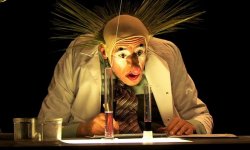 Recognized like one of the festivals of the province with more quality, it agglutinates the varied international offer, mainly for an adult public. It has four sections: the official program, Laplazaríe, Off Santa Fe and the Golfas Nights in Alexis. [...]

Santa Catalina, Day of the “Merendica”

The day of Santa Catalina (25th of November) the village is empty and the people celebrates the “merendica” , celebrating the signature of the Capitulations of Granada. The people used to go in romeria to the already disappeared Hermitage of [...] 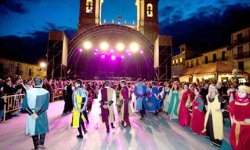 Day of the Discovery

On the 17th of April of 1492 Columbus and the Catholic Kings signed the Capitulations of Santa Fe, which would give as a result the discovery of America on the 12th of October of the same year. On this date, [...] 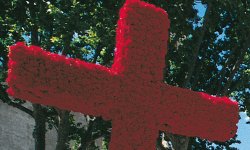 Day of the Cross

It is celebrated on the 3rd of May. This day the villagers build crosses that are decorated with flowers and other typical Andalucia’s decorations in the neighbourhoods where they live. There is a great atmosphere in the town and the [...] 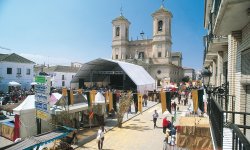 Celebrations of the Capitulations

In this celebration acts of cultural nature where the historical past of the city stands out take place. It is necessary to remember that it was in Santa Fe where the Catholic Kings and Columbus negotiated the conditions that would [...] 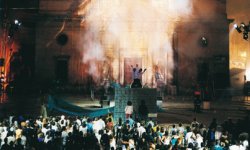 Patron celebrations of San Agustin (The burnt of ‘El Penas’)

Santa Fe enjoys its patron celebrations at the last week of August, coinciding with the celebrations of San Agustín, patron of the city. During five days, several are the activities that the Commission of celebrations organizes and prepares, which is [...]