Salobreña is perched on an imposing rock and still retains the medieval structure of its Arab past. Its network of alleyways and labyrinthine streets, and its whitewashed houses decorated with colourful flowers are set in beautiful surroundings. The town has many secret corners, doors, little windows, passages and vaults. The names of the town’s neighbourhoods such as La Loma, La Fuente, El Brocal and El Albaicín take us back to past centuries.

This town has a fantastic tropical climate, with an average minimum temperature of 14 degrees and a maximum of 32, so you can enjoy its beaches throughout most of the year. It is situated in the heart of the Costa Tropical and is very close to many other tourist attractions in the area.

Salobreña’s historical heritage is one of its attractions. Of particular interest are its Moorish Castle, the Iglesia del Rosario, the Medina, the Parque de la Fuente and the Parque y Mirador de Gambullón. The Tourist Office organises interesting guided walks in these and other places, such as the verdant plain that extends to the foot of castle, surrounded by sugarcane plantations and tropical fruit trees.

Due to its fantastic location, this area has been used by settlers of numerous civilizations. The first settlements date back to the Neolithic and Phoenician periods, but the Romans and Arabs have also left their mark here. During the Neolithic period, semi-nomadic shepherds frequented the area and left traces of their culture, such as the Cueva del Capitán in the Cercanías de Lobres. In the 8th century BC Phoenicians landed here and set up a salted fish factory. The town was conquered by the Carthaginians in the 6th century BC and under Roman rule it became part of the province of Hispania Baetica. During this period Salobreña was on the road that connected Castulo with Malaka.

Muslim rule began in 713 AD when Abdelaziz, son of Muza, occupied these territories and it lasted eight centuries. The town reached its height in the Nasrid period, during which it was renamed Salubania. It was conquered by the Christians led by Francisco Ramírez de Madrid in 1489. The captain was named governor of Salobreña by the Catholic Kings for his success in conquering the town besieged by the Nasrid king Boabdil. Between 1810 and 1812 the French occupied this area. In the second half of the 19th century the local sugar industry began to boom, and it was in this period that the town grew.

The local cuisine is varied and very good, and it has been considerably influenced by the many peoples who have populated the area over the centuries. Local seafood dishes are excellent, such as the pickled blue fish, dried octopus, sardines and seafood casseroles.

The climate ensures that many vegetables and fruits grow in the area, including tropical fruits such as custard apples, mangos and avocados. Homemade casseroles and local sausages are also worth trying. 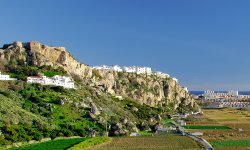 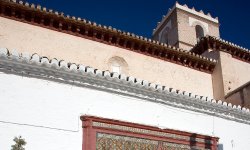 Built on the site of a Muslim mosque, this church is an example of the Mudejar style (16th century). The original roof was made of coffered wood that burned down in 1821, when the interior of the church had to [...] 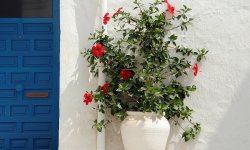 This neighbourhood is located near the fortress around which the town was built. The Christian cemetery was moved to this part of the town in 1788 and remained there until 1898, when the current cemetery was inaugurated. The viewpoint, 98 [...] 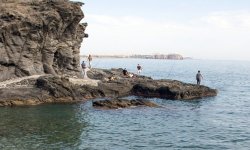 This beach is situated near the neighbourhood of La Caleta in Salobreña. There is no seaside promenade here but it does offer access to the disabled. There are never too many visitors here. The beach is about 30 metres long [...] 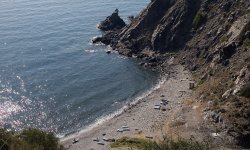 This is a small beach next to the populated area of Torre del Cambrón. Access is difficult and therefore occupancy is low. It does not offer any facilities. It is about 85 metres in length, and the sand is coarse [...] 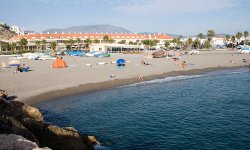 Wide and large beach with family atmosphere and good services. There is a promenade and houses and a tourist resort.

This is quite a long beach, surrounded by fields and crops, and is about 11 kilometres long and 25 metres wide. It has some catering options and offers a few other services. Peñón de Salobreña separates this beach from the [...] 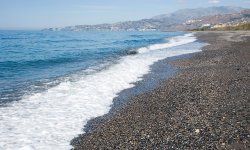 This beach in Salobreña is also known as La Cagadilla. It is a long, narrow strip of sand and gravel that runs parallel to an area used for agriculture continuing all the way down to Motril. It is 1200 metres [...] 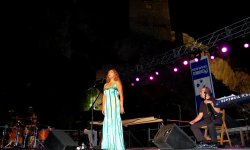 The quality, the originality and the experimenter spirit have turned  this festival into a reference point in the province of Granada. In it artists with vanguard works in all the fields meet: music, cinema, theatre, painting, sculpture… Place: Salobreña (Castle) [...]

The villagers decorate the streets with flowers, decorative elements of Andalucia, fruits, etc, next to a cross that presides the street. Contests with prizes in money for the best decorated crosses are organized. A rociero chorus goes around the crosses, [...]

Program of religious parades. It starts from the Church of the Rosary and the Church of San Juan Bautista. Advisable locations to see the parades: Rosario Street, Gloria Street, Real-Placeta Street, the stand in the Pontanilla Square. The parade of [...]

Every year, in October, many villagers of Salobreña enjoy a day together in company of all the villagers and celebrate the traditional romeria in honour of the Virgen del Rosario at the beach.

The so called Summer of Salobreña has a wide cultural, sport and musical program. The villa becomes a compulsory meeting point for holiday makers and locals of the entire province in the months of July and August. They have many [...]

As many villages of the coast, Salobreña celebrates on this day a procession in the sea and afterwards fireworks in honour of the patron of the sailors, the Virgen del Carmen.

During this week of celebrations the villagers and visitors of Salobreña can enjoy the fair, the night parties, sport competitions and other activities for all ages. 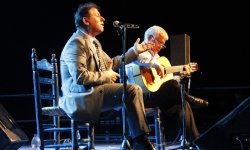 This Festival comes from the end of the 60s and it is one of the most desired summer appointments for tourists who spent their holidays there and villagers. The ‘Lucero del Alba’ takes place at the Moor castle of the [...]