“After the seemingly fruitless talks in Santa Fe, Columbus said goodbye to those that favoured him there… But soon afterwards the Queen sent a messenger from the Court after Columbus, to tell him that Her Highness ordered his return; The messenger found him two leagues from Granada, on the bridge here… As soon as the Queen knew he was coming back, she ordered that all the preparations Columbus would need for his trip should be carried out as quickly as possible.” This is how the chroniclers recount how the negotiations between the Catholic Kings and Christopher Columbus concerning the financing of his exploration almost failed.

Pinos Puente is located in the Vega of Granada, very near the city. It lies at the foot of the western slope of the Sierra Elvira. The Río Cubillas runs through the town. The origin of the town are ancient. Many archaeological remains were found in the Cerro de las Agujetas, the Cerro de los Infantes (the Ibero-Roman village of Illurco) and the Medina Elvira. The town used to be called Pont-Binox, (meaning the Bridge of Pines) and then Pinos de la Puente, until it was finally renamed Pinos Puente on 23rd February 1841.

You can go on a number of excursions around Pinos Puente, ideal for those who like the countryside and rural architecture. It is also a great area for cycling.

The poet Federico García Lorca used to spend his summers in three places of Pinos Puente: the Apeadero de San Pascual, where the family took the train when traveling to Granada; the Cortijo de Daimuz where, according to Lorca himself, was a Roman mosaic depicting the shepherds Daphnis and Chloe; and the Fuente de la Teja, that starts on the right bank of the Río Cubillas, in an area with many poplar trees, where the poet went almost every day.

This town is an important area of irrigated land, was probably a medieval farmstead and a key supplier of food to Granada. Many skirmishes took place here in Muslim times, including the attack by Don Alvaro de Luna and the battle between Muhammad I and Fernando III in 1242.

However, Pinos Puente is famous because of its famous connection with the discovery of America. Queen Isabel sent for Columbus, who was already on his way to France with dashed hopes to get the financial support he needed for his expedition. It was in this town that he was met by one of the queen’s messengers to call him back so that the queen could grant him the backing he needed. By Royal Decree of His Majesty King Alfonso XIII the town was given the title of city on 25th April 1928.

The rich cuisine uses many local products such as locally grown vegetables. Sausages, Migas and Gazpacho are all typical dishes. Guisos con habas and Fideos a la cazula are very good as are the Tortas de chicharrones and the Choto al ajillo. 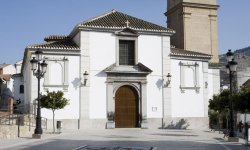 The Iglesia de la Consolación is rectangular in shape and is made up of three separate naves divided by pillars and arches. The central section and the main chapel have coffered ceilings. Inside there is an elevated choir and to [...] 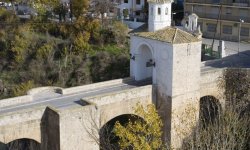 The Puente de Pinos, located in the centre of the town, runs over the Río Cubillas, and gives the town its name. It was built in the Caliphate period, in the 10th century, over ruins that date back to the Visigoth period.

This chapel, dating back to 1775, is located in the heart of Trasmulas. 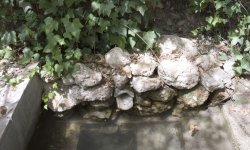 Another place related to Federico García Lorca is the Fuente de la Teja, space where the poet fought the heat of the Valderrubio summers. It is situated on the right bank of the Río Cubillas and is surrounded by leafy [...] 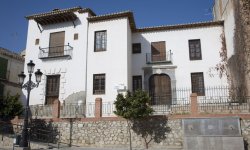 House of the Dukes of Abrantes

The Casa de los Duques de Abrantes, built in the 17th century, is located in the Plaza de la Iglesia. The entrance has a semi-circular arc with pillars on either side, with the family coat of arms decorated with vegetables, [...]

This route is altogether an adventure for the spirit: the two poles between which the fabulous cultural, religious, political and social legacy, which represents the stay of the Muslims in the peninsula, oscillates, with an almost moribund intensity. 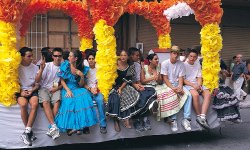 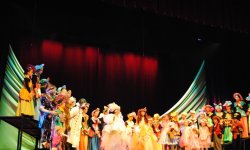 The City council of Pinos Puente and the Area of Culture of the Delegation sponsor the festival together, always offering a quality program to the public. It is one of the oldest of the province and it has always maintained [...]