Padul is located on the slopes of the Sierra del Manar, which is the westernmost tip of the Sierra Nevada. It is the first town in the Valle de Lecrín when you come from Granada. Its privileged location and its proximity to the capital have influenced its historical and urban development as well as its prosperous economy.

The area known as La Laguna is very interesting, an important wetland area that has a peat soil, where the remains of many Prehistoric animals have been found, including part of a spectacular mammoth skeleton. La Laguna is also a great place for bird watching and has some fantastic lookout points ideal for nature lovers. The Monte de Manar is a fantastic place for hiking, paragliding or cycling and riding.

The Valle de Lecrín has its own microclimate, with mild winds that blow over the calm landscape, where Mediterranean crops, like orange and lemon trees, thrive.

Padul has some interesting historical builidngs as well as the Fuente de los Cinco Caños, built in 1556, and the Calvario, with its large stone crosses dating back to the year 1700.

Many wheel tracks have been discovered in the area of ​​Los Molinos, near the Fuente del Malnombre. This was a popular Roman road leading to Almuñécar, a proof that this area already existed as a populated town in the Roman period. Arrowheads, axes and other instruments show that there were human settlements here since Prehistoric times.

The town’s name comes from the Latin term ‘paludem’, which means lagoon or marshy place. It is probably due to the fact that there was a marsh near the village that had been dried in the 18th century to turn it into farmland. The Arabs named it Al-Badul. It became a very prosperous place, both due to the agricultural industry as well as due to the silk factories and bread and oil mills. It is said that one of Muza’s sons lived here in the early 8th century.

It passed from the hands of Boabdil to El Zagal, then to King Ferdinand and then back again to Boabdil. It was finally conquered by the Marquis de Villena and under the command of Perez de Arostegui who valiantly defended it against the Moorish rebels. In the 19th century, during the first Republic, Padul was declared an independent municipality. The local economy has always been based on agriculture, but in the last years the construction industry has gained importance, and several sand quarries and brick and tile factories have sprung up.

This 17th century manor house was built in honour of Martín Pérez de Aróstegui, who defended Padul in the Moorish rebellion of 1568. 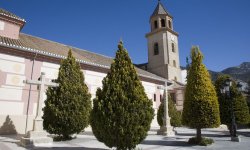 This church was built in the 16th century. The façade’s distinctive brickwork is typically Mudejar in style. Inside there is a beautiful Baroque altarpiece that stands above the main altar. 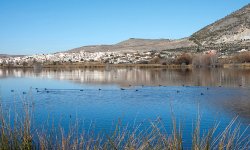 The Laguna de Padul is a wetland area of great ecological value. It is one of the best areas in the whole of Andalusia for bird watching, where some 158 different species have been identified. Among its reeds and cattails [...] 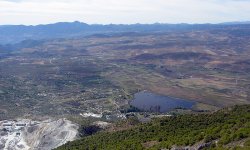 The Sierra de El Manar, in Padul, boasts numerous privileged viewpoints over Sierra Nevada and the Valle de Lecrín (Lecrín Valley). One of these is the Cruz de la Atalaya, a vantage point over the town and its surroundings. The route follows the path PR- A- 376, named of the Padre Manuel Ferrer Muñoz in honor of this Jesuit priest, mountaineer and naturalist.

In Padul the celebrations in honour of its patron, San Sebastian, in January, stand out. The offer to the saint includes the traditional parade under the light of the bonfires. During the 19th the villagers go out to the mounts [...]