The main tourist attraction of Motril is a combination of its history and its excellent beaches. The town has a tropical microclimate. It is located on the southern slopes of the mountain ranges of the Sierra de Almijara, the Sierra de Lújar and the Sierra Nevada, thereby protected from the cold north winds. In the summer many tourists come here to swim and to enjoy its many and varied beaches. There are beaches for families, hidden coves, beaches that offer all kinds of activities and even nudist beaches.

Motril has many places of artistic and historical interest. The oldest construction known in this town is the Iglesia Mayor de la Encarnación, which was built in 1502 by Cardinal Mendoza. Next to it is the town hall, built in 1631. Walking along the Calle de la Puerta de Granada, the former entrance through the city walls, crossing Ramblas del Manjón, you will arrive at the old Moorish suburb. Here the streets are steeped in tradition and you will see palaces dating back to the 17th century as well as a lot of Moorish architecture. Other places of worth seeing are the Castillo de Carchuna Castle, the Casa de Palma with its Pre-industrial Sugar Cane Museum, the Ermita de San Antonio, the Iglesa Nuestra Señora de la Cabeza, the patron saint of Motril and the Teatro Calderón.

The Los Moriscos 18-hole golf course and the marina are both located in Playa Granada. The commercial port of Motril is booming and more and more cruise ships use it as a base for trips and excursions around the province of Granada. The port also has a mooring area for boats.

The towns of Calahonda, Carchuna and Torrenueva have become major tourist attractions in recent years. They used to be small fishing villages.

Coins and other archaeological remains found in the town testify that the area was inhabited at least since the Bronze Age and later by the Carthaginians and the Romans. During the Middle Ages, Motril was a farmstead belonging to the Emir of Granada and fell under the jurisdiction of Salobreña. It was referred to by some authors as Moctril or Metrel.

Like the other places along the coast, Motril surrendered to the Christians in 1489, and suffered from severe depopulation. In 1510 Juana la Loca exempted the town of Motril from taxes and distributed its land between 500 Christian families. Since then it grew in importance and even overtook the neighbouring towns of Almunecar and Salobrena.

The town’s prosperity was due largely to the Christian settlers, who fearing invasion by the pirates, left the coast and settled in the mountains and grew crops. As the number of pirate attacks dwindled, the settlers moved slowly towards the coast of Motril, the longest of the entire Granada coast. It continued to grow rapidly until the mid-19th century when it had more than 12,000 inhabitants. It became the commercial and economic capital of the region, reaching its peak with the success of its sugar cane industry.

Today it is a modern city with about 60,000 inhabitants. It is continually being developed due to its commercial port and the cultivation of tropical fruits. It is agriculturally and industrially important, and its tourist industry, thanks to its historical legacy, is also very successful.

The waters of the Río Guadalfeo and the mild temperatures throughout the year have ensured that Motril has been an excellent place to grow fruit, vegetables and crops throughout the ages.

Although for centuries the main focus here was the production of sugar cane, which monopolized most of the land, the area around Motril grows potatoes, beans, peppers, tomatoes in green houses, as well as cereals and almonds. Many tropical fruits such as cherimoya, avocado and mango are also produced here. The specialities of Motril always include some of these delicious ingredients.

Motril is the main fishing port of Granada and supplies excellent fresh fish to the entire province. The shrimps, white prawns and lobsters are delicious as is the sea bass, snapper, bream and other sea fish. Two local specialties are dried octopus and the Moraga de sardinas.

The Torta real is a pastry that is worth a try and is best enjoyed with a bit of locally produced rum made in the Bodega de Francisco Montero. It is surprisingly good even though this part of the world is so far away from the Caribbean.

This house was built on the site of a sugar mill, which belonged to a Moor, but was confiscated by the Crown. Later the house was leased to Lucas Palma, a merchant from Genoa, after the uprising of 1569. From [...] 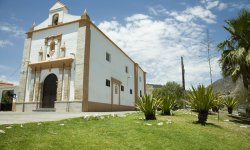 Located in the northern part of Motril, this chapel dates back to 1679 and is built in baroque style. It was at this time that the people of the town prayed to Saint Antonyto cure them of a devastating plague [...]

This is an interesting architectural style of this holy order, which was built in the second half of the 17th century. It is built in austere Mudejar style, and is made up of a single undecorated nave and choir stalls [...] 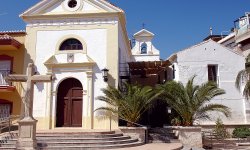 This church was first built in 1538. It was built on the site of the Ermita de San Roque, which had been erected in honour of the victims that had died of the plague. The cross on the front façade [...]

This church was built between 1510 and 1514 on the site of the old Alixara Mosque, in an area to the north of the Moorish town centre. Its construction was the work the master craftsman from Granada, Alonso Márquez. He [...] 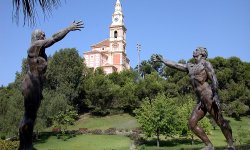 This was originally built on the site of the citadel, the residence of Queen Aixa Alhorra, mother of Boabdil, which defended Motril in the Muslim period. Isidro de la Chica built the church in 1631 in an austere proto-Baroque style. [...] 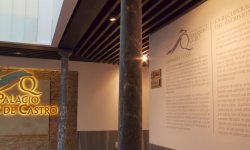 This exhibition space shows and explains the different mining eras by displaying the remains of the mine Cerro del Toro, located in the town of Motril. The exhibition is centred on two main points: a) The mining/geological evolution of the [...]

Very early, the villagers do a romeria to the abandoned village of Jolucar, at the bottom of the Lujar Mountain range, where the hermitage of San Cayetano is located.

In June the inhabitants of Motril show their devotion to San Antonio going in romeria to its hermitage.

The Crosses of May

In May the town of Motril celebrates the celebration of the Crosses. This way, many villagers build their floral monument, which will compete in beauty with the rest. To wonder around the streets of the town with the crosses in [...]

The patron celebrations of Motril, in the middle of August, are celebrated in honour of the Virgen de la Cabeza. The celebration program offers a great variety of events, the religious traditions, the cultural activities and the concerts standing out [...] 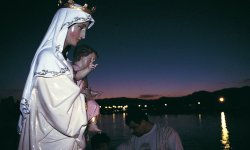 Celebrations in honour of the Virgen del Carmen

At the end of the second week of July many villages of the Spanish coast celebrate the celebration of the Virgen del Carmen, patron of the sailors. Motril organizes this day in a very colourful way, through a marine procession [...]