The visual power of the landscape and architecture of Montefrío are stunning. The imposing monumental structure that forms the Arab fortress and the Iglesia de la Villa, located on top of a rock are striking. Furthermore, Montefrío is set in a location of natural diversity. From the road that links Montefrío with Íllora you can access the Peña de los Gitanos, a natural rock that is bordered to the south by the Sierra de Parapanda.

Verdant oak forests and scrublands surround Las Peñas, chalky rocky alignments that run parallel to the valley. This is an ideal place for hiking, and there are many ways to reach it. Here you will also find some excellently preserved Megalithic stones, in amongst hundreds of dolmens of Neolithic origin.

Montefrío is located in the northwestern part of the province, in the heart of the Montes Occidentales that form the central sector of the Cordilleras beticas mountain ranges, between the Sierra de Parapanda and the Sierra de Chanzas. Its district has one of the most diverse and spectacular landscapes of the region, where the areas of steep vegetation contrast with carved crop and olive fields.

The hilly area is ideal for walking and taking part in sports such as cycling, riding and climbing.

There are some archaeological remains that prove the existence of different settlements from the mid-Neolithic period as far back as 4500 BC. At this time the town was located in the area known as the Peña de los Gitanos. This archaeological site that has recently been restored, has numerous megalithic tombs.

It was a wealthy town in antiquity: the Mons Frigidus (its Latin name) and Montefrid (its Arabic name) was on an important commercial route from Torre del Mar and Velez Malaga, via Alhama, leading to the countryside and the Valle del Guadalquivir. The Nasrid king Ismail III was crowned in Montefrío. He stayed here for seven years fighting the Moorish king of Granada Mohammed X (1445-1453). King Juan II helped Ismail III to besiege Granada; the astute Mohammed X summoned them into his embassy and he beheaded Juan in the room that is now called the Sala de los Abencerrajes de la Alhambra. Ismail survived and fled to La Alpujarra where later would be hailed king of Granada and given the name of Yusuf V. Montefrío was taken by the Catholic Monarchs in 1486.

The climate, soil and crop varieties all contribute to the exceptional quality of the extra virgin olive oil. The olives are the main focus of agriculture in the area. 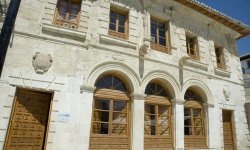 This house was built in 1579. It is thought that it was constructed for public use to be used to carry out artisan trade, however, its use has been very varied throughout its history. It has been restored and is [...]

This church was built in a perfect circle, at the top end of which is a small rectangular building that houses the main chapel. This is the only church, other than the Pantheon of Rome, that has just a single stone to close the dome. 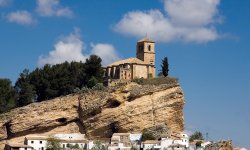 This church was built on the site of an old Nasrid castle, which in turn was built in around 1352 when Abú-Abdalá Jusuf reigned in Granada. He built his castle in a strategic place to help defend his borders.

The outer walls of the church were built between 1737 and 1763 (fondly known as ‘La Panera’, as it was built on the site of a former flour mill). Its solid outer walls are made of blocks of limestone. Its [...]

Built around 1795, this neoclassical building was designed to store grain. The ground floor is rectangular and open plan, made of stone blocks and wooden floors. It has an Arab tile roof. Its main facade is has a central door [...]

The magic of Christmas all year round is created in the Olive museum with a display of antique Christmas decorations, primarily of objects between 1870 and 1960. Besides the classic glass Christmas items, also decorations from the Erzgebirge, nativity scenes, [...]