La Calahorra used to be the main town within the estate belonging to Don Rodrigo de Mendoza, Marquis of Zenete, from whom the name of the whole area derives. From here he controlled and guarded all of his territories as well as the route from La Alpujarra to the Mediterranean coast via the Puerto de La Ragua. Because of its important strategic position he built a palace here inspired by the Italian style he admired so much. The outside was built in typical late medieval style and is now the most interesting historical building of the region.

La Calahorra is the northern entrance to the Puerta de La Ragua and its cross-country skiing resort. It lies between the two slopes of the Sierra Nevada. It is a municipality that has many colourful traditions and an interesting heritage. By strolling through the beautiful streets you can enjoy the traditional buildings and begin to understand the local culture.

The origin of this town dates back to Prehistoric times, as shown by the archaeological remains found in the area. It was occupied by the Phoenicians and used to belong to the old province of Bastetana. It used to be called Arcilacis, which later became Alcala Horra or Castillo de las Peñas. Visigoths and later the Muslims also occupied these lands.

In 1489 the town fell into the hands of the Catholic Kings, and in 1568 it supported the insurrection of the Moors against the Crown. The uprising was brutally repressed and the Moors were subsequently expelled. Later it was repopulated by settlers from other regions of Spain.

After the Reconquista, the land was given to the Marquis of Zenete, Rodrigo Diaz de Vivar y Mendoza, the eldest son of the Grand Cardinal Mendoza. Peculiarly, Queen Isabel, who was usually very strict in moral matters, turned a blind eye to the Cardinal’s lapses in morality. Rodrigo married into the El Cid family. He inherited the estates of El Cid in Jadraque (Guadalajara). The first Marquis of Zenete was renowned for being feckless and violent. He married once, falling in love with a fifteen-year-old girl from a local convent whom he kidnapped and married. Rodrigo built the castle/palace of La Calahorra for his beloved wife.

He was a very cultivated man and reportedly had a fabulous library. The Inquisition continually watched his daughter Mencía, who was also very intelligent and well read, because it was rumoured that she spread the theories and beliefs of Erasmus of Rotterdam.

Good local dishes include gachas, empedrado, and a stew called Sustendo made with potatoes, spare ribs, garlic and sausages. The Moorish influences are very apparent in the classic cuisine of the area as in the Rin-Ran (a cod dish). The local cheeses and pork sausages are also excellent.

During the feast day of San Antón, this chapel is the place where a very interesting and strange event takes place. The so-called nine-lap race is held here – a race in which mules run around the chapel!

This church was designed by the architect Francisco Antero and was built in 1546. It is rectangular in shape, with a single nave, side chapels and choir at one end. The nave has a Mudejar-style coffered ceiling typically decorated with [...] 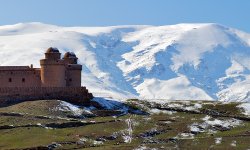 This castle is built on the only hill at the foot of Sierra Nevada that looks over the extensive plain of the Marquesado del Zenete. The Castillo de La Calahorra was an architectural revolution at the time, as it was the first Renaissance building to be built in Spain, a style that was already hugely popular in Italy. It marks the move away the Gothic aesthetic that was the style prevailing across most of Europe. The castle was built in just three years, between 1509 and 1512.