Iznalloz is located on the Tajo de la Hoz and used to be a military town, since the Romans used it as strategic place to defend the road that linked Tarraco with the eastern coasts.

The modern centre is built up around the Plaza de la Constitución, where the town hall is located. Most of the municipality works in agriculture, especially in the growing of olive trees, from which the best oils of Spain are produced. They are even have their own denomination of origin, the ‘Denominación de Origen Aceite de Oliva de los Montes de Granada’.

Another town that belongs to Iznalloz is Dehesas Viejas, which lost its municipal independence in 1973 when it was twinned with this municipality. Domingo Pérez, one of the newer towns in the region that sits on the southern foothills of the Sierra del Rayo, also belongs to Iznalloz. Here stone artefacts left by primitive civilizations have been discovered.

One of the main attractions of Iznalloz is in the Cueva del Agua. It is a huge cave that has numerous caverns from the Jurassic period, lakes of different depths, and even rock paintings. This cave is the subject of on-going scientific research as well as many exciting caving expeditions. There is a project to promote these caves, and visits can be arranged by making an appointment at Granada’s town council.

The recreation area of ​​El Sotillo is located near the town, among the pines and aromatic plants of the Sierra Arana. In the past herbs such as lavender were collected and distilled here to make essential oils. Now it has a number of restaurants and is home to the Museo Micológico. It is a great place for practising adventure sports such as rock climbing, hill walking and exploring gorges all around.

Many Prehistoric remains have been found in the municipality, especially in the caves dotted around the area. There is also clear evidence of its Roman history. The city of Acatucci was founded by the Romans, who also built a bridge across the river at the foot of the town that connects the Alto Guadalquivir valley to the coast. A Roman sculpture from the 3rd century, called Togado de Periate, was recently discovered at the side of a road just before Píñar. It is now on display at the Museo Arqueológico de Granada.

It was in the Arab period that the town’s current name was adopted, ‘Hisn al-Lawza’. At that time the Castillo de los Almendros was located in what today is Iznalloz, but unfortunately only a few traces remain today. It was one of the main defensive bastions of Granada on the border area of ​​the Montes Orientales.

The town was part of the defensive frontier between Christian and Arab kingdoms. Iznalloz was involved in many skirmishes in the 14th and 15th centuries until its fall in 1486, driven by the loss of Cambil. After the Reconquista it became a great commercial, agricultural and cattle breeding centre. The walk through Iznalloz reveals the diversity of cultures that have shaped the town.

Iznalloz has many specialities including Migas, Gachas, roasted meats, rabbit dishes, and doughnuts. It has many restaurants that line the main road, which serve local delicacies, including pickled partridges. Sunflowers, cereals, olive and almond trees grow here in abundance.

This chapel, dedicated to the Virgen de los Remedios, the patron saint of the town, is located near the road to Deifontes. It is a simple building with o single nave and a Mudejar ceiling. It was initially built in [...]

This church stands at the foot of the remains of the Castillo de los Almendros, in the centre of the old town of Iznalloz. Its construction, of enormous cathedral-like proportions, was begun in the mid-16th century based on a design [...]

Still in use, this Roman bridge from the 1st century BC was officially made a historic monument. It was part of the road network used during imperial Roman times. It is located at the entrance of Iznalloz and extends over [...]

This used to be a forest house in El Sotillo, but is now a small centre for the study and research of different types of mushrooms. Museo Micológico is made up of four rooms in which more than 150 different [...] 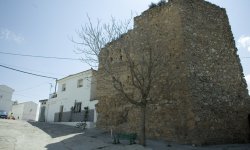 At the top of the Colina de Iznalloz hill you can see a few remains of the Castillo de los Almendros. This was built in the Nasrid period on the ruins of another older structure. This fortress had two towers, [...] 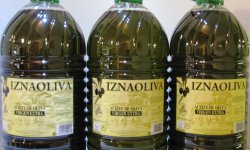 Celebrations in honour of the Virgen de los Remedios 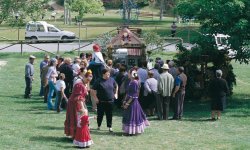 On this day they do a romeria to the place called Sotillo de Sierra Umbria, in which great part of the population participates with chariots and typical dresses.

On this day they do a romeria to the place called Sotillo de Sierra Umbria, in which great part of the population participates with chariots and typical dresses.

Celebrations in honour of the Virgen de los Remedios