This town is located on the banks of the Río Barbatas by the Sierra de la Encantada. Itsmanor houses are particularly lovely and they still bear their coats of arms on their façades. The town belongs to the Diocese of Toledo and this explains its many religious buildings, including the Colegiata de Santa María from the 16th century.

Huéscar is set in beautiful natural surroundings where you can see some giant sequoias, planted there over a hundred years ago. The Río Guardal has several monuments around it including the Puente de las Ánimas dating back to the 16th century, which was declared a national monument of historic and artistic interest in 1982, and the Puente Duda, whose pillars rest on a rock face. The Canal de Carlos III springs from the Finca de las Fuentes de Guardal.

Huéscar has been a human settlement since Prehistoric times, as it can be seen from the numerous archaeological sites in the area. In 1915 the Piedra de Letrero, a natural shelter dating back to the Neolithic period, was discovered.

The Arabs used the town, which was dotted with Roman villas, as a military centre. It was under the rule of Tudmir in the 7th century and it later became part of the Kingdom of Granada. From the beginning of the 13th century to the late 15th century it was the site of many fights between Arabs and Christians, as it was located on an important border. In the early 14th century it was besieged by the army of Ismail I, who destroyed the castle called Uxkar. The most important year of the history of Huéscar is 1435, when the fortress was conquered by Don Rodrigo Manrique, father of the poet Jorge Manrique, who celebrated this event in his poem Coplas por la muerte de su padre.

Huéscar fell under the jurisdiction of the Crown of Castile in 1488, and seven years later the Catholic Monarchs gave it to the Constable of Navarra. The town had 6,000 inhabitants by the 16th century, but after the expulsion of the Moors the population was halved. It belonged to the Diocese of Toledo from 1544 to 1953.

Huéscar has an extensive range of dishes based on local products such as lamb, pork, legumes and vegetables. Typical dishes include Remojón de San Antón, Lata de cordero, Lata de conejo, and its famous Relleno. Local pork products such as sausages and blood sausage are excellent.

Huéscar is also famous for its vineyards. The following grape varieties are grown in the area: Blanquilla, Gordal, Generval, Blasca and Tinta doble. 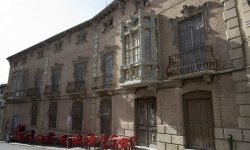 This unusual building was built by the Penalva family, and is one of the finest examples of Catalan modernist architecture, as can be clearly seen from its impressive façade.

This church dates back to the early 16th century. It was designed and built by Diego de Siloam. Of particular interest is the door of the sacristy and the Renaissance main entrance. Inside the church there is a fantastic Gothic [...]

This convent was built in 1547. It was converted into the Teatro Oscense in the 19th century. Of particular interest are its beautiful coffered Mudejar ceiling and its courtyard. It has been declared an official Monument of National Interest.

This Gothic church was built in the 16th century on the ruins of the main mosque in the town. Its stone walls and the coat of arms of the Duke of Alba on the side entrance of the church are [...] 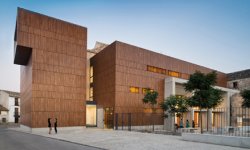 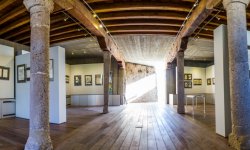 There are regional dances, concerts of the music bands, cinema, theatre, exhibitions, etc… The villagers, previously awaken by other villagers called Despertadores, accompany in parade   the carving of the Virgen de la Cabeza to its hermitage, located about 6 km. [...]

Santa Cecilia is the patron of the musicians and, logically, the festive program is mainly musical, with parades, concerts and even artistic exhibitions and of stamps centred in musical themes. The celebrations are organized by the Brotherhood of Santa Cecilia [...]

It is celebrated the last weekend of October. It is a national contest-auction of Segureña’s sheep.

The towns of Huéscar and Puebla de don Fadrique share the patrons St Alodía and St Nunilón. Their feast day culminates in a celebration taking place on the Monday following Pentecost, usually in May. There is a pilgrimage to the [...]

They are organized by the Brotherhood of San Anton. Religious activities and other with more folklore, as the lottery of a pig, fireworks and bangers, take place. The eve of the San Anton day, the families get together and taste [...]

On the 14th of August a parade, in which the chorus of Despertadores go out to the streets early in the morning to play coplas, is celebrated. The next day the carving of the Virgin goes back to its hermitage [...]