As the French geographer Jean Sermet said: ‘Guadix is ​​a city that should not be described; it must be seen.’ It is located on the north side of the Sierra Nevada in Hoya de Guadix, in the pass that connects the east to Andalucía. It is a city of great historical interest, one of the most important in the province of Granada and one of the oldest in Spain. It has a rich and extensive historical and artistic heritage. The examples of religious and civil architecture are very interesting.

Three urban areas are clearly defined: the higher area with its many cave dwellings; the medieval, Renaissance and Baroque area; and the new Guadix, the result of more recent urban development. The unique town centre includes historical neighbourhoods such as the Barrio de las Ermitas or the Barrio de las Cuevas, with its many cave dwellings dug into the earth. The Arab Alcazaba is an official national monument and stands on top of the hill. The monumental Cathedral and many churches and chapels dotted around the town all have fascinating histories.

Tourism is very developed in Guadix, offering visitors all kinds of accommodation including hotels, cottages and cave dwellings. The range of sports that can be enjoyed here includes fishing, canoeing, hiking, biking, riding and even motor sports in the Circuito de Velocidad de Guadix.

The most popular celebrations take place during Easter. The Cascamorras, shared with Baza, is very important and has been declared an event of international tourist interest.

The area where Guadix is ​​located has been inhabited since Prehistoric times. It is one of the oldest human settlements in Spain, probably because it is located on an important crossroads. Neanderthal and Palaeolithic remains have been found here. The Phoenicians and Carthaginians called it ‘Acci’, from which its current name derives. Guadix was an important Roman colony on the banks of the Via Augusta. Julius Caesar made it an official town in 45 BC and he called it ‘Julia Gemela Acci’. During this time there was an important coin mint here. In the Gothic period the city went into decline.

The Muslims made the town important once again and left their Arab mark on it. During this period, Guadix enjoyed periods of success and failures, splendour and decadence. In the 10th century Abderramán III made it a place of great military importance. During the civil wars in the last stages of the Nasrid dynasty, it became the capital of the kingdom headed by El Zagal. It later became an episcopal judicial and religious hub due to the role played by the Archbishop of Toledo, Rodrigo González de Mendoza.

In 1489 it fell into the hands of the Catholic Monarchs and the Muslims were forced out into the suburbs. Years later, with the uprising of the Moors, they were fully expelled from the town. Some exiles returned in secret over the years and began to build their homes in the town, creating the special and unique cave dwellings we can still see today. During the reign of the Emperors of Austria and the Bourbons, Guadix became a city of the Ancien Régime. With the invasion by Napoleon’s troops in the 19th century,, the city declined, but it later recovered.

The local food in Guadix reflects the city’s diverse cultures and people. Dishes such as Olla, stews, Migas, Rin ran (with roasted peppers and cod) and Gachas are all delicious. Local pork sausages are particularly good.

Guadix has two culinary classics, the Pimentona sopa de Guadix and the Tocinos de cielo. Try these with some local wine. The sweets and pastries here are also excellent and include Pestiños, rice pudding, custard and fried doughnuts. 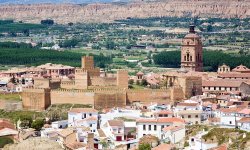 The Alcazaba de Guadix is famous for the excellent views you can get from its towers. From here you can see the town’s Las Cuevas neighbourhood from above. This Arab castle dates back to the 10th and 11th centuries and [...] 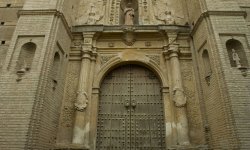 This convent belongs to an order of cloistered Franciscan nuns. It is located on the site of a former Arab souk, and for this reason its main entrance is via the Alcazaba. Large historic houses currently surround the convent, because [...]

This convent was founded by the Catholic Monarchs. It has a single rectangular nave with a choir over the door. Its Mudejar ceilings are particularly interesting – they are probably one of the finest examples of Mudejar coffered ceilings in [...] 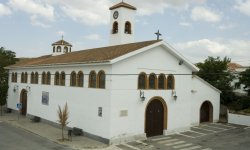 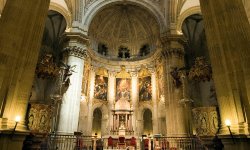 This beautiful cathedral was built between the 16th and 18th centuries in pure Renaissance and Baroque styles. It was built on the site of a former mosque and of the old Gothic cathedral. 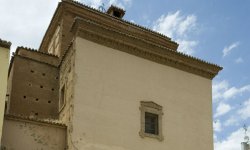 This church was founded by the Jesuits in the 17th century. It was built under Vicente Acero in Renaissance style with a magnificent Baroque façade. It is built in the shape of a Greek cross. There are small altars located [...] 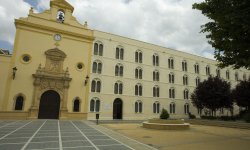 This church has a single nave with a vaulted ceiling in the presbytery. There is a modern altarpiece located in the chapel of Our Lady of Sorrows, the patron saint of the town. This church has no tower. Its façade [...] 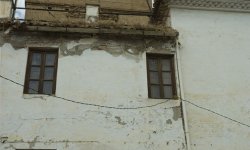 This church has a single rectangular nave with a presbytery at the end and a Mudejar ceiling. The main entrance opens up to the bottom of the central nave, while the façade is simple with just a single tower. The [...]

The religious events start with the celebration of a novena, which finishes the 14th with a big floral offer to the Virgin. The day before, in the afternoon, they read the program of events of the celebration at the church [...]

The night before this celebration they lit the luminarias, in which they burn symbolically the beard of the Saint so he protects the villagers. The romeria to the hermitage takes place in chariots and decorated horses, taking seven laps around [...] 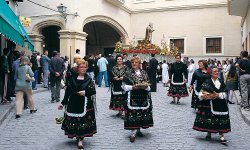 Celebrations in honour of San Torcuato

Celebration of a pontifical mass presided by the Bishop. They take the relics of the saint around the city and, apart of other activities, they distribute beans and typical cakes at the Plaza de las Palomas. 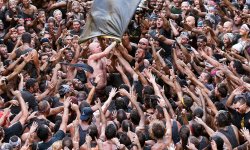 The Fiesta de El Cascamorras is celebrated in Baza and Guadix every September and was declared a celebration of International Tourist Interest in 2013.