‘In this town I had my first dream about the distant future. In this town I will be the earth and the flowers.’ Federico García Lorca was born on 5th June 1898 to Doña Vicenta Lorca, who worked as a teacher there. For this reason there are many references and walks dedicated to the poet and dramatist in this town as well as monuments and even a museum built in his memory.

Fuente Vaqueros is located in the heart of the plains of Granada, which are watered by the Río Genil, surrounded by fertile groves and fields. Dotted around the area are farmhouses, the town of La Paz, with its simple church, and the village of Pedro Ruiz: all of them inspire verses of magical poetry whilst strolling through the shady poplar trees and verdant fields, with the noise from the eternal flow of the canals all around.

Fuente Vaqueros shares history with the surrounding area. Probably of Arab origin, it enjoyed a period of splendour in the Nasrid period until the Christian conquest in 1492. Like other towns in the area, the expulsion of the Moors decreased its population and it was later repopulated with settlers from other regions.

These lands were part of the area that the Crown reserved after the Reconquista as a hunting and recreational place, with dense forests and plantations. Here the Soto de Roma was also built for the kings. Eventually in 1813 this estate was given to the Duke of Wellington as a reward for services rendered during the War of Independence against the French. Between Romilla and the Río Genil you can still see a watchtower called Torre de Roma, which was considered the place that marked the southern boundary of the royal estate.

Until 1940 Fuente Vaqueros belonged to the Duke of Wellington. The land was rented to the settlers who were buying it up little by little, until eventually this municipality was formed.

The vegetables grown around Fuente Vaqueros are the highlights of the traditional local dishes. Green asparagus, widely grown here, is used a lot with potatoes, spinach and peppers. Vegetable dishes include Lecha pava,  made with pumpkin, the Sopa de maimones and Patatas en gloria, with oil and vinegar.

As for the meats, Collejas en ajillo, Cochifritos and many pork products are very popular. Huevos a la nieve is a typical dessert, along with wine doughnuts. Fruit, such as apples, plums, persimmons and pears are also eaten a lot. 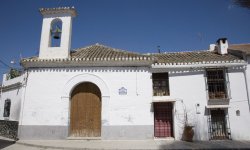 This church was built in 1663 and is situated in La Paz, near Fuente Vaqueros. It is dedicated to the Sacred Heart. 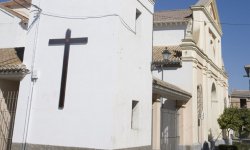 This modest church with a single nave became a parish church in 1780 and was was a royal chapel until 1837. The original building was demolished and rebuilt in 1954. Inside you will see the baptismal font in which the [...]

This house – where the Spanish poet Federico García Lorca was born on 5th June 1898 – is a must-see for every visitor to Granada. 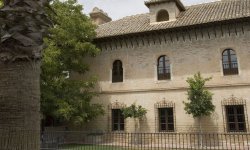 This house is located little more than a kilometre outside of town, in the direction of Valderrubio. It is a small palace with lovely gardens and exotic trees. From here the Soto de Roma estate, an old country property of [...]

The Plaza del Ayuntamiento is at the centre of the main roads of the town of Fuente Vaqueros: the Avenida de Andalucía lies to the east; Avenida del Genil runs down to the river; and the Paseo del Prado, with [...]

Washington Irving was the prototype of the pure Romantic traveller, who passed most of his life travelling round Europe, and, attracted by the “exoticism” which the country then offered, naturally landed up in Spain. He was appointed Ambassador of the [...]

With the cultural Week, Fuente Vaqueros remembers the birth of the poet Federico Garcia Lorca, being the main day the 5th of June. This day is full of cultural and recreational activities and, after the traditional act in his honour [...]

In honour of the patron, the Santo Cristo de la Victoria, this is a celebration of religious character if you compare it with the Popular Celebrations, which take place in September.