This municipality is formed by the towns of Cádiar, Narila and Yátor. It is nestled between the majestic Sierra Nevada and the Sierra Contraviesa, next to the Río Guadalfeo. It is worth visiting the town to see the quaint Barrio Bajo, an example of pure La Alpujarra architectural style.

As the writer Gerald Brenan said, Cádiar is the central point of La Alpujarra, “its belly button“. In the words of British writer, is it is “…a prosperous and cheerful town” and an ideal spot for travellers to refuel. Besides having the only petrol station for many kilometres, it also has some excellent restaurants and the local winery, Barranco Oscuro, produces some of the best red and white wines in the province.

Cádiar is close to one of the most interesting types of tourist accommodation in the province of Granada. It is the Alquería de Moyrama, designed in the style of a traditional Andalusian farmhouse and named after the wife of Boabdil. It has a well-stocked library, a traditional cellar and several museum areas that house some of the region’s most interesting ethnological and archaeological pieces.

The GR-7 footpath passes through the municipality of Cádiar, a path that links Greece with the most western part of Andalucia.

Under Arab rule, Cádiar was the permanent residence of the chief judge of the Eastern Alpujarra and its name derive from the Arabic word al cadi (literally judge). In Muslim times it was made up of five neighbourhoods and two other towns. During the uprising of the Moors under Philip II, it was home to Aben-Xaguar, the uncle of the leader of the uprising, Aben-Humeya.

The first rebel leader was crowned king in a grove near Cádiar, and it was here that the conspiracy that would end its his reign, in favour of his cousin and successor Aben-Aboo, was planned. In the 15th century the village was sufficiently large and important to officially become a town. After the expulsion of the Moors there was a huge exodus of its inhabitants. Later it was repopulated with settlers from other parts of Spain.

This town is famous for its good breads, excellent stews and tasty desserts. The rice with partridge or rabbit, the barbecued meats and the traditional Moorish pastries are also delicious specialties. Local fine wines should also be tasted. Try some of the wines that Manuel Valenzuela produces in his Bodega del Barranco Oscuro.

This chapel was built in the 16th century out of brick. It is rectangular in shape, with a single nave and a bell tower. 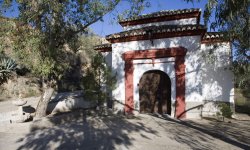 This small chapel was built in honour of the patron saint of Yátor, San Sebastián. It has a single nave. 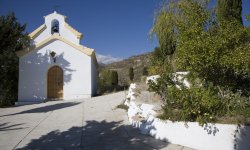 This small chapel houses an image of the patron saint of Narila, Santa Rita.

The church was built in the 1560s in Mudejar style. It has a single nave and square tower topped with tiles. Oneach side of its bell tower there are two rounded arches, decorated with mosaics. 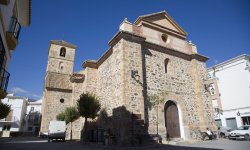 This Renaissance church was previously called the Iglesia de la Concepción. It was built in the 16th century in the shape of a Latin cross. 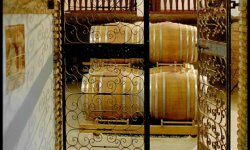 In Yator, anejo of Cadiar, they honour San Sebastian. In this day they take the saint out in procession around the streets of the village and they organize different events, the night party outstanding among them.

In the Rambla del Banco, cortijo of Cadiar, they celebrate with a romeria to the hermitage of the village the day of the Virgen de Fatima. The mandas or promises are common and villagers of the nearby cortijos come to [...]

During the night they lit bonfires or candelas in which they throw old furniture and useless things.

San Blas is the patron of Cadiar. The villagers celebrate a procession in which the mayordomos (the ones who organize the celebrations) show the estandartes, necklaces in a way of scapular with coloured laces. This date coincides with the usual [...]

In April San Marcos is celebrated in Cadiar. In this celebration it is a custom to go in romeria to the outskirts of the town to kill the devil, expression with which they welcome the good weather. This is an [...] 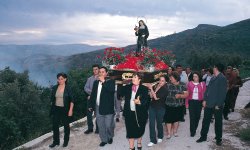 Celebrations in Narila in honour of Santa Rita

In Narila, one of the population centres of Cadiar, the figure of Santa Rita is honoured. The carving of the Saint is taken down from the hermitage of the same name the 13th and it is taken out in procession [...] 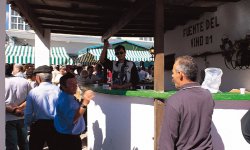 In October Cádiar celebrates the traditional autumn festival in honour of Santo Cristo de la Salud. In1967 a novelty that would become the main attraction of the event was introduced. A fountain with two taps was installed; one of the [...]