The municipality of Benalúa is located to the west of the plains of Guadix, at 870 meters above sea level. The surrounding land has a high clay content, making it easy for the inhabitants to make themselves ancient cave dwellings.

Under the direction of Manuel Fernandez-Fígares, a local landowner and engineer, an important industrial network started here in the first half of the 20th century. It began with the sugar factory of Nuestra Señora del Carmen (1913), then the pulp mill Ntra. Sra. de las Angustias, the flour-mill Harinas de Benalúa, the El Carmelo mill, the grape seed oil factory Ntra. Sra. De la Esperanza, the León Vega spirits factory, and a number of smaller factories including a soap factory.  This made the area industrially prosperous.

The image of Benalúa changed with its increased manufacturing importance. The town grew to make way for a workforce that had increased fourfold.

In the second half of the 20th century the local economy experienced a second expansion with the emergence of more factories. However, the economic downturn in the early 1980s was challenging and the town changed its industrial model to that of co-operative production.

Around Benalúa there are several archaeological sites illustrating the presence of continued ancient settlements which ran from here all the way to Hoya de Guadix. It is thought that the name Benalúa comes from the name of a local Muslim farmstead.

In the early 18th century Benalúa was already a large farmstead. In 1752 it had 170 inhabitants, 55 caves distributed into two sections, a public fountain and a flourmill. It was a farming and agricultural community where nobody owned their own land.

In the 1830s the Hermanidad de Animas brotherhood, an order devoted to the Virgen del Carmen was founded and the local council was formed. By the middle of that century Benalúa already had 663 inhabitants and 146 homes. The main crops grown here included cereals, hemp, flax and beans; cattle breeding was also important.

Vegetables and fruits are always used in local dishes, as are quail, partridge and rabbit. Local sausages are delicious as are the typical Pringue cakes, grilled lamb and Tarbinas stew. 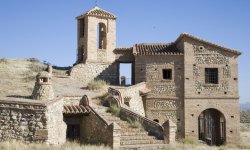 This simply built chapel houses a number of images and relics of San Torcuato, patron saint of Guadix. 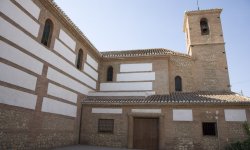 Very near the site of this present-day church built between the 18th and the mid-19th centuries, there was a small chapel that depended on the parish of Fonelas. In 1832 the Hermandad de Ánimas y del Santísimo Sacramento brotherhood built [...] 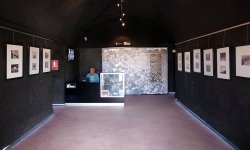 This cave was dug during the period of the Second Spanish Republic by village workers who used it to hold union meetings here. They also used it as a cultural and meeting centre. Today it is a modern exhibition centre [...] 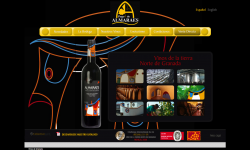 Patron celebrations in honour of the Virgen del Carmen

Religious celebration in honour of the Virgen del Carmen. It is celebrated with offers to the Virgen and other religious, cultural, recreational and sport activities.

Celebrations in honour of the Virgen del Carmen

In July the villagers get organized to honour its patron, the Santisima Virgen del Carmen. This celebration has religious events as well as recreational ones, with popular games, bangers, exhibitions and night parties, among many activities.