This town is nestled in the Parque Natural de Sierra Nevada, on its southern slopes near the Río Guadalfeo. The layout is typical of La Alpujarra, with steep, narrow streets and flat-roofed houses. Due to its location Almegíjar has remained peaceful and undisturbed throughout history. It has lovely temperatures in summer, which make it ideal for high quality fruit, olive and almonds.

In the shape of an amphitheatre in the middle of the Cerro de la Corona, the best place from which to enjoy views of the surrounding area, full of traditional tajaos, is from the Tajo de la Cruz.

The town is part of Notáez and today preserves an authentic atmosphere, described by Gerald Brenan in his work Al Sur de Granada. Cars may not enter the town as a measure to protect its beautiful floral gardens.

Almegíjar celebrates the festival of its patron saint, Santo Cristo de la Salud, from 13th to 15th September, with the middle day being the most important. It is also a good place to be during Holy Week, when the patron saint is carried in a procession to the Paraje del Calvario in the Tajo de la Cruz.

Almegíjar shares history with the rest of towns and villages in La Alpujarra. Geographic isolation means that we have no record of it until the Arab period, when it became an important centre for the production of silk. It fell under the rule of the Crown of Castile after the Reconquista, its population continually threatened by the Christian authorities from the late 15th century onwards.

In the mid-16th there was an uprising of the Moors against the Crown, under the leadership of Aben Humeya (otherwise known as Fernando de Válor). When the Moors were finally expelled the surrounding area was heavily depopulated. Later, peasants from Galicia, León, Asturias and Castille repopulated it.

Wintry stews, jams, excellent sausages and other meat and pork products are local specialities, as are quality fruit and vegetables. The local sweet snacks and desserts are of Moorish origin. 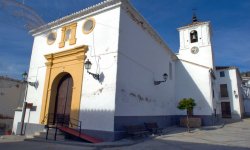 This church was built in 1651 and is home to a beautiful altarpiece depicting the image of the Cristo de la Salud. The carving, creator and exact age of this sculpture is unknown, but it was brought here long ago [...]

Celebrations in honour of the Santo Cristo de la Salud

This celebration take place every year on the 14th and 15th of September. The first day of the celebrations has a more religious content, with the celebration of a mass and a parade afterwards. The same day, there is a [...]