This town is nestled in the Sierra de Tejeda, on a steep cliff that hangs over the Río Alhama. It has a famous spa that was used by the Romans and Arabs, and today offers modern treatments for arthritis, rheumatism and stress. It has a rich heritage and the old town was declared a Monument of National and Historic Interest. The town celebrates a number of events, such as the romería del vino in September, carnival and the Festival de Música Joven.

There are some remains here of the Roman road, the Roman bridge and some Roman villas. However, it was the Arabs who left the greatest mark on the town. The labyrinthine streets and intricate layout of its Arab neighbourhood, the remains of the town wall, the watchtowers and, most importantly, the ruins of the Baño Fuerte with its splendid horseshoe arches make this town hugely interesting.

With the Reconquista in 1482, new buildings replaced the old mosques, synagogues and Arab palaces. The Iglesia de la Encarnación, the Convento del Carmen, the Convento de San Diego, the Casa de la Inquisición (symbol of new power), the Cano Wamba and many private houses were built, creating a city with a rich architectural heritage, in perfect harmony with its natural surroundings.

Alhama is linked with two other towns: Ventas de Zafarraya and Buenavista.

Alhama overlooks a steep cliff, which is one of the most popular tourist attractions of the town. The ruins of the El Navazao and El Chopillo farmsteads, the Cuevas del Agua, the Cueva de la Mujer and the Cueva de los Molinos all point to the fact that this area was inhabited during the Neolithic era.

First the Iberians, then the Phoenicians and later the Carthaginians all settled here. Pliny called the town Stici and Romans called it Atigi, but it was the Arabs who gave it its present name, al-hammam (hot water or bathroom). This was the battlefield of the Moors and the Christian troops of the Catholic Monarchs, who finally seized the town from the Muslims in 1482. Chroniclers of the time wrote that… “800 Moors died and 3,000 were imprisoned, leaving a rich booty of gold and silver, seed pearls, silks, jewels, horses and mules, and infinite amounts of wheat and barley… “

In 1884 the town was partially destroyed by an earthquake, but its reconstruction, on the initiative of King Alfonso XII, was carried out with sensitivity towards the traditional architecture.

The cuisine of Alhama is very good and makes the most of locally grown vegetables, especially beans, and local pork products. Local stews, Migas, and wide varieties of beans are frequently used in dishes, which are accompanied by locally produced wines. Local pastries are also delicious, especially those made by the nuns of Clarissa de San Diego. 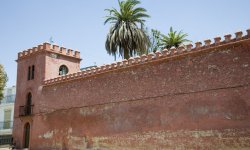 This castle was built on an ancient Arabian citadel. It is made of irregular stone and was rebuilt in the early part of last century. It is located in the centre of town. It is privately owned and is not [...]

The Balneario de Alhama is a monument of great historical interest. The balneario is a perfectly preserved set of baths dating back to the 12th century built by the Arabs.

This public fountain dates back to the 16th century. On it you can see the coat of arms of the Catholic Kings and Charles V. It is situated in the centre of the town.

This house was built in Flemish gothic style in the 15th century and dates back to the same period as the Iglesia Mayor. It used to be the headquarters of the local court of the Inquisition. The façade, a mixture [...]

This prison is a public building located near the Plaza Real or the Plaza de los Presos. An inscription dating back to 1674 on its Renaissance Mudejar façade marks its construction during the reign of King Carlos II. 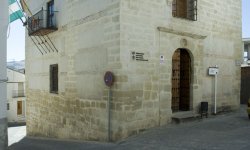 The architecture of this hospital, the first in the Kingdom of Granada built by the Catholic Monarchs, mixes Mudejar, Gothic and Renaissance styles. Its construction began in 1485. It is situated in the historic centre of town on the site [...] 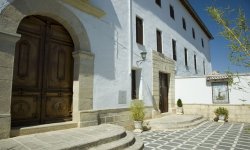 This Franciscan convent was built in the 17th century in Baroque style. Today it is used by nuns of the Order of St Claire. 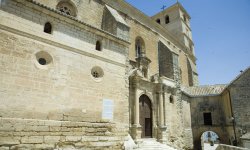 The mighty tower of this church was probably built on the site of a former mosque. It is the visual reference point of the town of Alhama. Work was begun on this church at the end of the 15th century [...]

Feast of the farmer, highlighting the pilgrimage of wine, which takes place on August 15, which provides ‘pot jameña’ and wine from Alhama to the visitors.

It is celebrated in the lit up fair enclosure, with stalls where they organize dances and all sort of attractions.

Celebrated for the first time in 1966, its objective is the discovery and the promotion of new values of the musical interpretation. There are two categories: flamenco-fusion and pop, therefore they are included most of the musical styles played in [...]

During the Fair of San Juan there are many sports events, as the volleyball tournament, the football indoor championship, the cycling race around the village and other bowlies, darts and ludo tournaments. In the closest days to San Juan the [...]

The celebration of La Candelaria takes places in the town of Alhama de Granada at the beginning of February. They light bonfires in many streets; they cook migas, omelettes and churros, which, as the wine, are offered to the visitors. 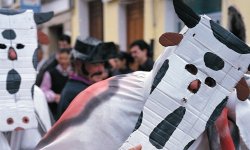 Alhama, the town that the Arab king was so sad to lose, was very popular already in the Roman period. Its thermal baths and the positive effect they had on the locals also made the town famous. This characteristic happiness [...]