The municipality stretches inland from the coast and has the best of both worlds. Here you can enjoy the sun and the beach in the town of La Rabita, on the Mediterranean, or go hiking in places like the Majada de los Campos. You can walk through the labyrinthine streets of an old town that is steeped in history, visiting buildings like the Casa de las Margaritas, where the Granadan writer Pedro Antonio de Alarcón stayed to write some of his work.

Albuñol is famous for its natural beauty. You can spend a few days in this town and enjoy the peace and quiet. The very special Paya del Ruso will always welcome you with clean, warm waters. You can walk in the hills, where you will find caves and other natural attractions. The Cueva de los Murciélagos is an archaeological site dating back to the Neolithic era.

The history of this area stretches back to Neolithic times, shown by the archaeological remains found in the Cueva de los Murciélagos. Here, several skeletons have been unearthed, along with burial artefacts and remains of the clothing in which they were shrouded. For a while these remains were kept in the National Archaeological Museum, but were later given to the Archaeological Museum of Granada. The only written reference to Albuñol is from the 15th century.

This municipality is likely to be of Roman origin. It reached its peak in the Arab-Andalusian period thanks to its agricultural resources. Albuñol became the capital of the Grand Cehel or the Great Coast and was defended by the fortress of La Rábita, no trace of which can be seen today. In 1505 Don Luis Zapata acquired the Señorío de Albuñol from Juana, the daughter of the Catholic Kings, and Albuñol received its town charter. In the early 17th century its population dropped drastically with the expulsion of the Moors, following the revolt of Aben Humeya, It was later repopulated by people from the Count of Cifuentes’ lands in Castile, Galicia and Leon, who were resettled here. In the late 19th and early 20th centuries this town became famous as the birthplace of one of Spain’s outstanding politicians called Natalio Rivas. He was Prime Minister several times and also played an important role in local parliament.

Both the nearby region of La Alpujarra and its proximity to the sea have influenced the cuisine of this municipality. Typical local delicacies are goat and garlic, leeks with fish, Arab pastries, and fried milk.

Albuñol has a very long wine-producing tradition and in its hills you will see the vineyards of the Costa wines, with their unique flavour and high alcohol content. The local sausages and black pudding are also a speciality. This area produces delicious aromatic almonds, the base for the traditional sweets from Albuñol such as almonds with dried figs.

A particularly good fish dish called espichadas comes from La Rábita and is made with air-dried sardines.

This chruch was built in 1616 by the priest Pedro Mercado. Later it was rebuilt in 1803 by the architect Juan de Mata Velasco. It is built in the shape of a Latin cross,has three naves, 12 altars, two towers [...] 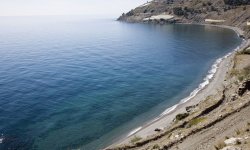 This is a secluded gravel and sand beach, with no equipment or services. It can be accessed only on foot. It is a narrow beach, 800 metres long. The number of visitors is medium to low. 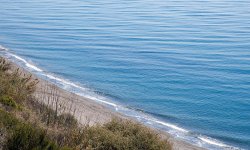 This narrow strip of sand is about 15 metres wide and runs parallel to the N-340 for about 1 kilometre. It is in an isolated spot and therefore receives few visitors. It does not offer any services or facilities. The [...]

This is a small and narrow beach about 300 metres long. It is situated in a secluded area near the N-340 and there are never very many visitors. The beach is made up of a mix of coarse sand and [...]

The small town of El Pozuelo, belonging to the municipality of Albuñol in Granada, has a beach about one kilometer long and about 25 meters wide. As always on the Costa Tropical, the water is usually very clean and the [...]

This is a secluded beach on the N-340, 250 metres long and 25 metres wide. There a never very many visitors here. The beach is made up of sand and gravel. There are no facilities or services offered here.

This is a stony beach near the village of La Rábita. It offers a good number of facilities and services, as well as being a peaceful retreat for bathers and walkers. It is about 700 metres long and 30 metres [...]

This secluded nudist beach can be reached on foot from the N-340. It is about 300 metres long and usually quite empty. The sand here is medium-grained.

This celebration takes place around the streets of the village with the parade of the patron of Albuñol, San Patricio, next to San Jose. At night, the recreational atmosphere continues with the night parties.

San Marcos is the protector of the cattle and for it there is a romeria where the participants go accompanied by the blessed cattle. It starts at the hermitage of the saint to arrive to the centre of the town, [...]

Celebration in honour of San Pedro

Los Castillas, pedania of Albuñol, celebrates its traditional patron celebrations in honour of San Pedro from the 27th to the 29th of June. San Pedro, from its hermitage, is witness of how the kids of Los Castillas take the first [...]

Every 8th of September takes place the celebration that goes back in time to the XVII century, when the Virgen del Mar was found by fishermen at the Buho beach. In these dates, La Rabita was decorated and enjoys several [...]