Ginkgo Biloba in the Botanical Garden of Granada 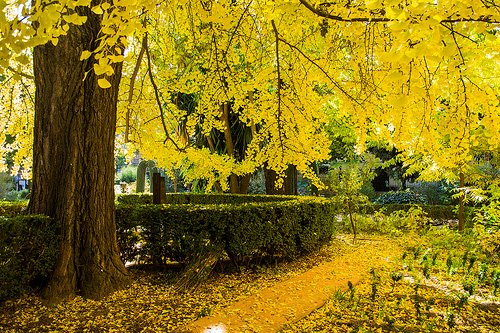 The living fossil that inspired the poet

It is not surprising that the incredible poet Elena Martin Vivaldi dedicated a poem to the Ginkgo Biloba tree in the botanical garden of Granada. This tree stands out amongst the others in the area, which are already bare and sickly by the end of autumn whilst Ginkgo Biloba shows off its lush golden foliage.

A tree. Good. Yellow/ from autumn. And radiant /it opens itself to the sky, greedy/ for more light. Its shine/covers the garden. And natural/free, its colour scatters /in front of the blue sky.

Until the 1960’s this particular tree, planted in 1889, was the only one that existed in Granada. Today, the girth of its trunk is one metre and it is much taller than the adjacent Law School building. What attracted Martin Vivaldi to this tree, other than its beauty, was the cloud of Asian mystery that surrounded it.

The botanists José Tito and Manuel Casares, who restored Granada’s botanical garden, consider the tree “a living fossil.” Its distant relatives grew in the Palaeozoic Era, one hundred million years before dinosaurs became extinct. They slowly began to disappear as time passed, but unlike other species, they have managed to survive until now. Ever since the 9th century Asians have considered these trees to be sacred.

The Ginkgo is native to China and was first discovered by the West in 1690 in Japan, where they are usually found near temples. This is why here in Europe they are known as “trees from the pagodas”. Initially they were imported as ornamental trees. They are deciduous trees and the shape of their leaves, divided into lobes, reminds us of fans. The fruit, which is white and the same size as a cherry, is slightly poisonous and breaks easily, producing a foul smell similar to rancid butter. However, this did not stop Asian poets from describing them as “silver apricots”. Each fruit contains a seed similar to a pistachio, known as the “Ginkgo walnut”.