Difficulty: Medium-Low, return in the opposite direction once consumed 1/3 of the bottle.

The immersion can be done protecting yourself from the winds coming from the west and without many currents. At the beginning we will find a bottom of sand and rocks having on our left the rocky cliff. The rocks will be mostly covered with red and brown algae in the areas most exposed to light, while in the shady and hidden areas we will see many invertebrates. 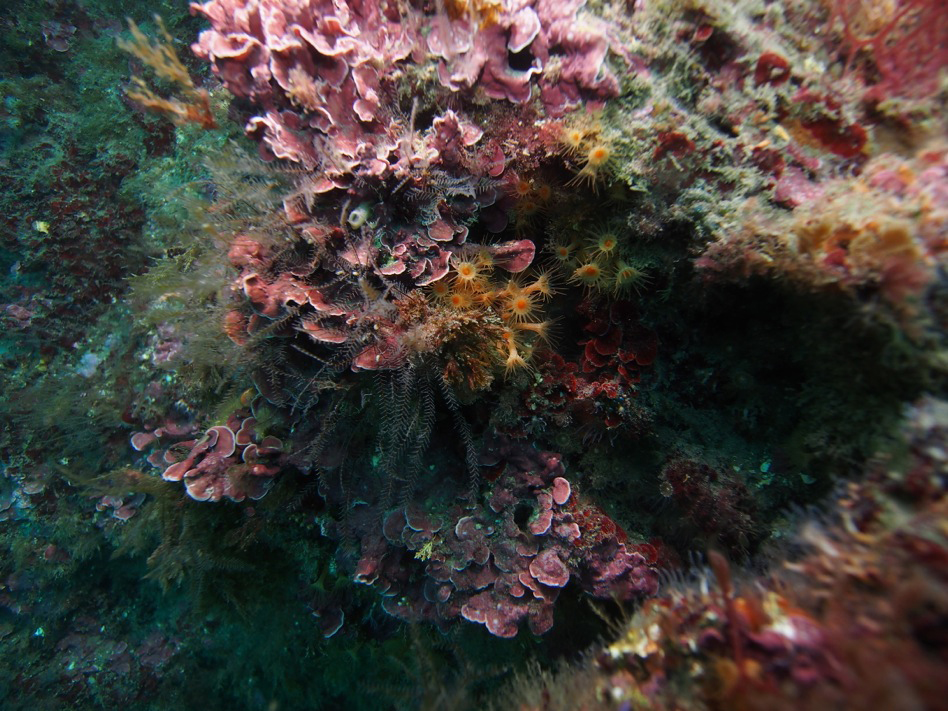 In the open areas we will be surrounded by schools of carangidae and clupeidae such as Sardina pilchardus, as well as common two-banded sea bream and other sea breams.

The colonies of anemones Cerianthus membraneceus are abundant and characteristic of this dive. There will also be encrusting yellow anemone colonies and various species of polyps that give these funds great color. In the open areas we will be surrounded by schools of carangidae and clupeidae such as Sardina pilchardus, as well as common two-banded sea bream and other sea breams. In the bottoms closest to the cliff groupers, forkbeards and other species with similar behaviors are more frequent.

The route can be extended until 1/3 of our bottle is consumed, then start the return, although there is the option to make a Caribbean-type dive and finish the tour in the west direction until reaching “cueva de las palomas” immersion zone.

All this area could be done in a single dive if there is no current and if there are not many stops and distractions. It can also be done in two sections if we want to observe in detail the great diversity of invertebrates present. Dive bordering the cliff on the border between sand and rocks. Return in the opposite direction and now, in favor of the current, once consumed 1/3 of the bottle. It is advisable to return to the rocky slope at medium depth to avoid a possible deco. If we keep the depth at 19 m we must limit the immersion time to 45-50 min.

A diving permit is required to dive in “Paraje Natural Acantilados de Maro-Cerro Gordo”. You can make the immersion through the dive centres that have the required permission or independently requesting the “autorización para la realización de actividades de uso público, turismo activo y ecoturismo en Parajes Naturales ” to the Territorial Delegation of the Ministry of Granada.

No more precautions need to be taken than normally adopted. The dive has a low difficulty level, with a maximum wind force of 4 (Beaufort scale) of moderate breeze, and depth is not considered dangerous.