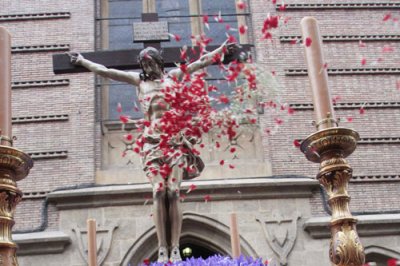 Tunic
Purple with red masks and a sash. Satin golden capes for the delegados.

Candles
Red in the first section and white in the second section.

Where to see it:
On its way through the Plaza Nueva, Carrera del Darro and the Paseo de los Tristes on its way up to the Sacromonte.

First float:
Representing Christ crucified. It is the only image in all the city of a crucified Christ with four screws.

Artist:
A copy by Zúñiga made in 1989. The original was made by Joseph Risueño at the end of the 17th century.

Second float:
Virgen del Sacromonte, a bust image of the Dolorosa. She is looking up to the Heavens and has beautifully sculpted hair.

Artist:
The bust was made by the Brothers González in the 18th century. Miguel Zúñiga adapted it to make it into a Dolorosa in 1982.

Interesting details:
The Brotherhood is the most popular during Holy Week in Granada due to its special connection with the gypsy people and the spectacular saetas and bonfires that you can see during the ascent to the Sacromonte, and because of the fact that it starts in the Abbey. The ascent goes on until dawn of Maundy Thursday.